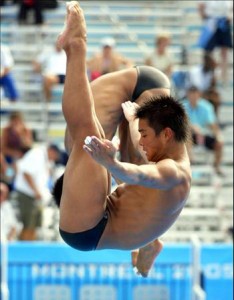 Darren and Paul were not only best friends they were also one of Britain’s best hopes in the up-coming European Synchronised Diving Championships. They had been best mates since they were ten and now at 18 they had formed a tremendous chemistry that made each know and do whatever the other was thinking. As divers, that had to be split-second perfect, not only to complete the precise entry, but to do it as one, it had taken real effort on both their parts. Standing at the top of the high board together, looking identical in their pale blue, bum hugging, crotch enhancing Speedos, their mental fusion was total. As they bounced on their toes, making calf and thigh muscles strain, arms held high, each smooth chest taut under the forceful push-off into the air, the perfect spin, the graceful twirl and the sleek slip into the water, only they knew how they had perfected that union of souls – eight years earlier… with a kiss.

No matter what psychiatrists, specialists or people who think they know say… even at the age of ten these two friends knew they wanted to be together. Through school, through sport and through their young lives they had always been there for one and other; helping, encouraging and loving. People who knew them couldn’t help but notice the synchronicity of their minds and bodies. In class they raised their hands together to answer questions, in tests they got the same marks and in sport they matched each other perfectly in whatever game they undertook. Some teachers tried to split them up, put them on opposing teams, but that would usually end in disaster because apart – they just didn’t function correctly. What their teachers didn’t know was when the boys were ten they had committed themselves to each other. Where this idea of commitment at such a tender age had come from, no-one but the lads themselves know and it remains a mystery to this day. Only Darren and Paul know why, at the age of ten they had kissed or why from that day to this, they always kissed when together. The other kids called them names and tried to shun them but the truth was… it was Darren and Paul who shunned all the others. No one could get close to them without both boys wanting that to happen. Hell, even their diving coach was kept at arms length by the two as they explored and honed their developing skills. Jealousy and envy followed the friends as they ignored the rest of the world and only listened to each other. That commitment was now paying off as with each synchronized dive they got nearer to perfection.

They knew this wasn’t a ‘big time’ sport but medals bred interest and now the cameras were on them for the final dive of the competition. As they waited to be called, and in front of a European television audience of millions, they kissed each other passionately before climbing up to their starting points. A gasp could be heard from the crowd watching at the pool, no doubt echoed in the homes of the viewers, but they didn’t know that this act was the thing that made these supreme athletes the winners they were about to become. A deafening hush descended on the pool as the two boys gathered at the board edge. Separated by just a few metres, concentrating but not looking at each other, they took their cue purely on instinct. Legs bent to launch themselves high into the air in perfect formation, the elevated twist, the super sleek spin, the final tumble and the perfect entry into the water took just a couple of seconds but they emerged to see the scores; the highest scores ever recorded… and it was unanimous. The viewers at home might have caught the brief underwater shot of our two champions embracing briefly just before they surfaced, in unison, to the side of the pool. But what no one could have foreseen was the way these two best friends would be catapulted to superstardom on the back of that kiss.