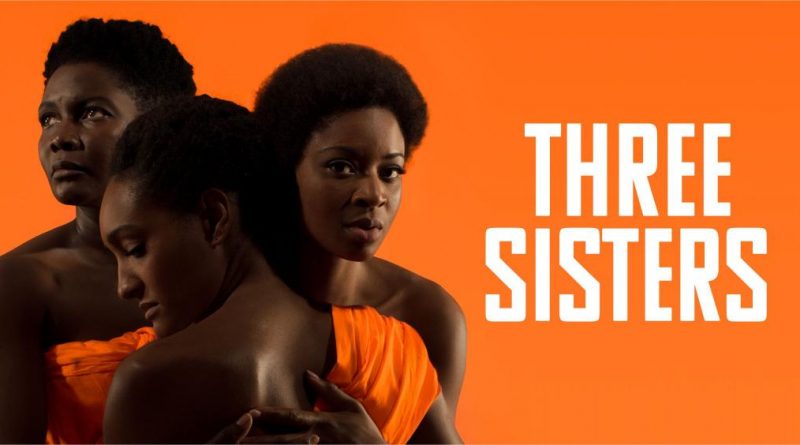 The very soul of Chekhov – qua themes, scenes, characters and relations – yet all grippingly reset in an African body! Bent’s Adrian Gillan hails a recontextualised Three Sisters at the NT!

“After Chekov” doesn’t quite acknowledge the debt. 95% of Inua Ellams’ remarkable new version of Three Sisters – its spine, heart, guts, soul – is Chekov. Yet we are transported not to a languid Russian Godot-like backwater but rather to a tense and on-the-brink Nigeria as it rides the Biafra War (1967-70).

In so doing, almost nothing is lost; and a surprising amount gained – including a whole new audience demograph, not to mention old audiences watching anew, perhaps (like me) even learning some history!

If suspicious of the current trend for resetting classics, this might, just might, be the one to convert you!

Naturally, all adaptors/directors seek to make classic plays relevant to a modern audience. The Almeida Theatre’s very recent staging of this same work tried to achieve this by decontextualizing events, so as to highlight the universals that we can all still relate to. Conversely, this National Theatre co-pro with Fuel attempts the same by recontextualising – to a specific time/place of greater pertinence to us now.

As said, Ellams has actually remained immensely faithful to the 1901 Russian original’s themes (female strategies for survival in a man’s world; nostalgia and memory; meaning, purpose and ‘progress’), structure, plot and symbolism – and especially to the characters and their dynamics and interrelations.

Yet beyond this core framework, the specific Biafra resetting – against a deadly and violent backdrop of war – makes the whole piece more pertinent and immediate to 2020 Britain: not just to those living here of Nigerian decent, but to anyone historically linked to the British Empire, which this version powerfully holds in no small way culpable for events. Out: mere philosophical languor. In: tribalism, bombs, blood.

Britain has been entangled with the geo-politics of Nigeria for centuries – as slave traders; then colonisers; then arms suppliers; and now, still, oil extractors. After Nigerian independence from the UK in 1960, the educated Igbo minority clashed with the Hausa majority and others – coup then counter-coup, with mounting ethnic friction and violence – until Igbos declared the Republic of Biafra, their own ‘haven’ in the South East of the region, from 1967 to 1970, when the Biafran army surrendered to larger Nigerian forces; the country reunified. Exiled from capital Lagos to join this short-lived Igbo republic, our eponymous three sisters yearn to return to the metropolis, and pre-war peace – just as their lives are shattered; not just by conflict, but by unrequited loves, ironic infidelities and splintered dreams.

Sarah Niles plays lynchpin anchor role, Lolo, bringing out the feisty and politically aware rather than the resigned or prudish traits of this eldest sister. Natalie Simpson makes for a frustratedly moody middle sister, Nne Chukwu, fed up and contemptuous of her irritatingly good-but-dull try-hard husband Onyinyechukwu (nerdishly comically played by a dotingly oblivious and ultimately passively forgiving Sule Rimi) who regrets not having been able to marry Lolo; whilst falling for dashing, poetic soldier Ikemba (understudy Jerome Ngonadi oozing eloquence and charm, disillusion and sadness).

Racheal Ofori fizzes as youngest sister Udo, yet her dreams of moving back to Lagos to find fulfilment are all as tragically dashed as the hopes of her older sisters, and everyone around her. Peter Bankolé is painfully and comically humourlessly earnest as her adoring, lovesick Nmeri Ora who, realising he may have her hand but never her heart, well-nigh welcomes death at the wrestling hands of love-rival, the hot-headed pathologically-hand-wiping Igwe, fierily played by a superbly temperamental Jonathan Ajayi.

Jude Akuwudike delivers a jovial yet jaded Eze, observing and wryly commenting as he helplessly watches the lives of the three daughters of the woman he adored, but didn’t marry, disintegrate. Anni Domingo is touching as insecure ailing servant, Nma, heartbroken by the death of her adoptive young revenge-seeking servant girl orphan Oyiridiya, tragically desperately rendered by blazing Diana Yekinni.

Hauntingly voiced Amarachi Attamah adds atmosphere as Ọka Mbem, The Chant Poet; as does Adedeji Adetayo as guitarist, Chidi. Hats off, too, to composer, Femi Temowo; and music director, Michael Henry. Impressive company voice, movement and fight work as well, all round.

Three Sisters runs at the Lyttleton Theatre (National Theatre) in London until 19 Feb 2020. For more info and to book tickets, call 020 7452 3000 or visit www.nationaltheatre.org.uk