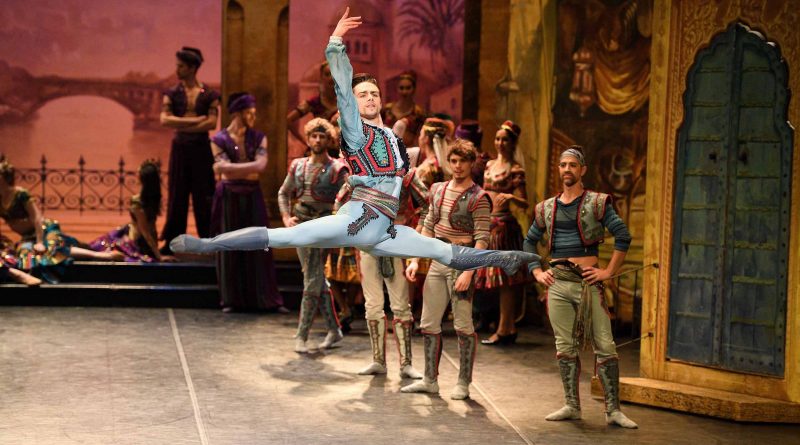 A classic ballet, but where the boys get all the best moves! Bent’s Adrian Gillan gasps ‘n cheers his way through the ENB’s swashbuckling ‘n rarely-staged Le Corsaire at the London Coliseum!

The exquisite English National Ballet was the first, and remains still the only, British ballet company to perform Le Corsaire as a complete work – although other companies here regularly perform excerpts.

Since originating in Paris in the mid-19th Century, this dazzling three-act work – whose libretto is loosely based on the 1814 poem The Corsair by Lord Byron, about the love between a pirate and an enslaved girl – has evolved more than even your average ballet, but has swaggering Russian bravura at its heart!

This 2013 ENB version is by Anna-Marie Holmes – based on staging by Russian choreo-kings, Marius Petipa and Konstantin Sergeyev – and had a brief prior genesis in the USA pre landing on British soil!

This slim-lined pacy 2¼-hour-including-two-intervals production contains completely re-imagined set and costume designs by veteran, Bob Ringwood – from a vibrant market to a moonlit cave to a lavish palace, not to mention drug-fuelled dreams and wave-crashing high seas – honouring traditional exotic period orientalisms in aesthetics and textiles; and all magically lit by Neil Austin.

The story is powered along by two ENB Lead Principals with a remarkably natural and, at least seemingly, effortless chemistry together. As pirate chief Conrad, Italian leaping-legend dreamboat gent Francesco Gabriele Frola puts the ‘a’ in alpha, the ‘m’ in mucho-macho-male – freeing, loosing then freeing again his enslaved love Medora, incarnated by the endearingly feisty-yet-delicate Japanese beauty, Erina Takahashi, who proves the girls do get a fair few good moves hereabouts too!

Don’t miss out on two male ENB First Artists who are very much on the rise! Brit Henry Dowden gives a scorching and wonderfully-acted account of Conrad’s treacherous second in command Birbanto. And American dancing demi-god Daniel McCormick completely owns the show-stealing/stopper-of-a-role of Ali, spectacularly combining restrained slave passivity with near super-human gravity-defying shape-throwing power-and-poise. Puts the ‘Le’ in Corsaire! One of the most divinely expressive male necks imaginable! Already publicly voted ENB Emerging Dancer 2018 – frankly if he emerges any more I fear my eyes’ll pop right out – McCormick deserves a queue-jump fast-track to Lead Principal! Won’t be long!

Only one niggle: re the jaw-droppingly strangely superfluous programme note saying the ENB is sure we the audience “has the knowledge and the critical frame of judgement” to realise that a ballet depicting “piracy, slavery and the suppression of women… reflects but does not endorse these attitudes”. Please!

This is an absolute rollicking wowzer of a production, showcasing some of the greatest ballet sequences ever created, performed by some of the most exciting dancers – homegrown and international – we could dare hope to have the privilege to see. Rarely performed! Musn’t be missed!

Le Corsaire runs at the London Coliseum until 14 January 2020. For more info and to book tickets for this or other English National Ballet shows: www.ballet.org.uk