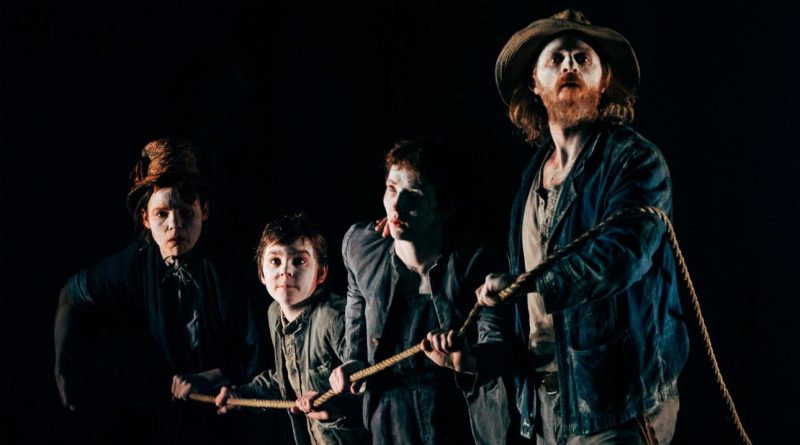 Two families, one continent, as past flows into present! Bent’s Adrian Gillan is rocked by Sydney Theatre Company’s potent account of The Secret River, hosted at the National Theatre, London!

Sometimes you have to open old wounds to heal them. And we can only analyse our present and shape our future if we acknowledge and understand our oft painful past. Few pasts have been as supressed or as painful or bloody as that of Australia; few overseas stages more apt, for the telling, than a British one.

Kate Grenville’s acclaimed 2005 novel, The Secret River, pulls no punches in its handling of Australia’s dark and, until recent decades, largely kept-secret history. And Andrew Bovell’s 2013 theatre adaptation firmly removes any gloves, rebalancing even more fairly towards a First Nations perspective than the original book; the play given a guts-and-all rendering in this award-winning production from Sydney Theatre Company, hosted by the National Theatre in London, following a stint up in Edinburgh.

This truly epic tale explores what happens then two families, divided by cultures, meet and collide – over land. An intimate human flashpoint tells the story of an entire continent; and of colonialism and buried histories more generally – all the more shocking since the atrocity is conducted not by ogres, but by real people, not so unlike you or I. Conceived in collaboration with Aboriginal artists and performed partly in Dharug as well as in English, a sizeable, genuinely ensemble cast – many doubling up roles – use both naturalistic and stylised means to powerfully poetically convey events on the largely bare Olivier stage.

Taking over at short notice – following the sad, sudden, unexpected death of cast member Ningali Lawford-Wolf whilst up in Edinburgh – Pauline Whyman hauntingly plays the anchor role of Dhirrumbin, the dignified prophetic narrator who advances, and comments upon, the action throughout.

A New South Wales convict, transported with his family from the slums of London, William Thornhill earns his pardon and lays claim to a stretch of land he might, for the first time, dare to call his own – until he meets its ancient custodians, the Dharug people!

A blank canvas for the drama’s fluid imaginings, Stephen Curtis’ design involves a spartan sand-dusted space in front of vast drapes upon which actors’ shadows are occasionally projected, all made by degree intimate and expansive by Mark Howett’s lighting, complimented by Steve Francis’ sound, and by Tess Schofield’s costumes which pack a powerful spine-shivering contemporary punch in the very final scene, as settlers’ and First Nations’ descendants briefly appear in modern dress, the former’s guilt-ridden privilege and the latter’s continued disadvantage a present-day reality, by direct line.

Raves, too, for voice/text coach Charmian Gradwell and language consultant Richard Green, for so well conveying the fascinating vocal evolution of accent between England and Australia; and for Scott Witt’s fight direction in a work bristling with violence, both realistic and stylised. Pure, crucial, epic drama. See.

The Secret River runs at the Olivier Theatre (National Theatre) in London until 7 Sept 2019.