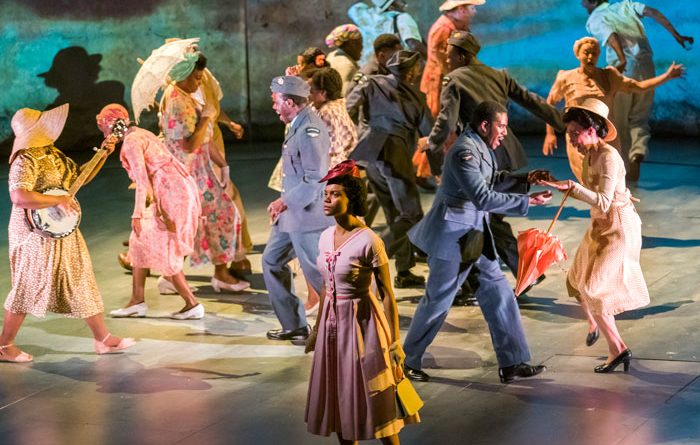 We are here because you were there! Bent’s Adrian Gillan hails the National Theatre’s powerful adaptation of Andrea Levy’s modern classic novel about empire and immigration, Small Island! Few issues are more universal or timely than the connection between oft-oppressive history and global mass migrations. Hence the ‘kick’ in Andrea Levy’s remarkable award-winning 2004 novel exploring the tangled history of Jamaica and the UK; made into a 2009 TV two-parter; and the book now adapted into a hard-hitting yet oft-hilarious stage version by Helen Edmundson for the National Theatre.

Small Island journeys from Jamaica to Britain, through WW2 and up to 1948 – the year that the HMT Empire Windrush famously docked at Tilbury. It cleverly follows three intricately connected stories – that of Hortense, who dreams of escaping impoverished and restrictive rural life in colonial Jamaica; fellow Jamaican, Gilbert, who longs to become a lawyer, after migrating to Britain to “fight for The Motherland”; and feisty Brit, Queenie, who flees dreary, small-minded Lincolnshire for cosmopolitan London, where all their lives mix amidst a harsh racist reality. Those fleeing one small island in the Caribbean ironically encounter another island many of whose inhabitants deem too small for all! Levy’s essential factual and morally pertinent message in response: We are here because you were there!

It is not possible to single out the rest of the 40-strong ensemble individually but extra big bows for David Fielder as Bernard’s shell-shocked father, Arthur; Johann Myers as lanky, sensual activist, Elwood; and Beatie Edney as luxuriant Aunt Dorothy, doting on her niece, Queenie. The child actors playing the young Hortense and Michael were also well chosen vis-à-vis their older counterparts. Directed by the NT’s Artistic Director, Rufus Norris, the show is a perfectly-cast, boldly-staged hit! Such state-of-the-nation offerings are, rightly, at the very heart of what our National Theatre should be!

Small Island runs at the Olivier Theatre (National Theatre) in London until 10 Aug 2019. For more info and to book tickets, call 020 7452 3000 or visit www.nationaltheatre.org.uk