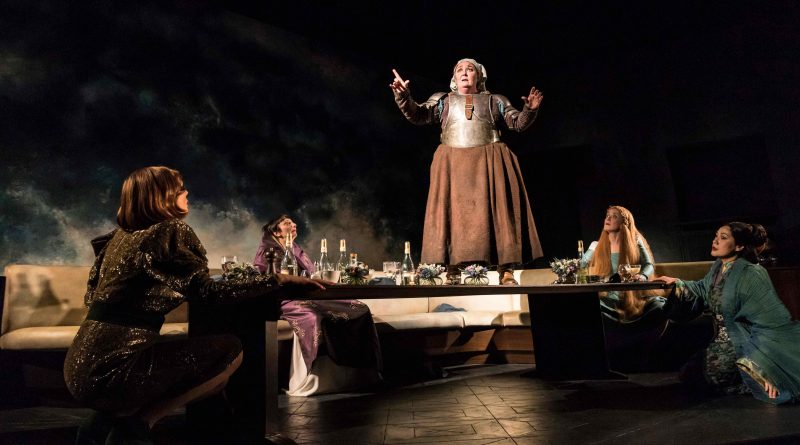 How to best survive and thrive as a woman in a man’s world? Bent’s Adrian Gillan enjoys the National Theatre’s revival of Caryl Churchill’s still-timely critique of 80s Thatcherite feminism!

Marlene is a shoulder-padded, power-dressing, go-getting 80s material girl, ruthlessly prepared to sacrifice anything – including her own past and family – to succeed at work. Her work is in fact, at least ostensibly, to help other women who want to do the same. And she is celebrating, since she’s just been made the first female boss – ahead of her male rival – at Top Girls, the high-flying female job agency!

Veteran British playwright Caryl Churchill is perhaps best known for her 80s plays like Cloud Nine and Serious Money – tackling abuse of power, feminism and sexual politics, often using non-naturalistic genres. Just so, Top Girls premiered at the Royal Court in London in 1982 and has enjoyed revivals in the UK and worldwide ever since. Yet this well-resourced National Theatre staging may well be the first professional production that doesn’t double- or treble-up any casting, instead using a full 16-stong all-female troupe, even with a couple of extra ensemble members thrown in for good measure!

In the famous coup de théâtre opening scene, Marlene throws a surreal dinner party to rejoice in her new job: a kind of fantasy with five female guests – relatively unknown yet prominent historical, fictional, even mythical characters, drawn from well over a thousand years of history. The meal degenerates into a drunken swaggering debauch, a parody of male behaviour. A masterpiece in its own right, the scene also dazzling sets up the emotional backdrop to the play’s three ensuing real-life scenes.

During the imagined dinner, Katherine Kingsley – wonderful steely yet blatantly tragically lonely as Marlene throughout the entire play – is noticeably cagey and in denial about herself, instead playing the host, a catalyst between her guests as they discuss lost lovers and babies, and how they have all, in their own ways, succeeded in a male-dominated world: until we realise that they are all, in fact, merely aspects of her repressed, conflicted self. Marlene doubtless doesn’t have too many real-life pals, and this purely dreamed celebration of her promotion is a kind of subconscious appraisal of her own soul.

Siobhán Redmond is rugged yet refined as pioneering female Victorian traveller and explorer, Isabella Bird. Amanda Lawrence is subversively mischievous as the (probably apocryphal) 9th Century Pope Joan, supposedly stoned to death for being a women disguised as a man, most unfortunately giving birth mid-procession! Wendy Kweh is philosophical as 13th Century Lady Nijō, low-born concubine to the Emperor, turned Buddhist nun. Ashley McGuire is hilarious as earthy, fiery yet reticent Dull Gret, the Flemish folkloric figure depicted by Bruegel. And Lucy Ellinson is painfully submissive as long-suffering Patient Griselda, the medieval and renaissance character in fictions by Boccaccio, Chaucer and such.

The three ensuing real-life scenes that conclude the play each yield theatrical frissons, moving from the public urban party, to a private rural hideout (reminiscent of a small Cold War bunker), back to a buzzing public urban employment agency, then back to a private rural house. Designer Ian MacNeil cleverly and spectacularly delivers these high-contrast changes to maximum NT effect, letting the second, intimate downstage hideout scene mask the assemblage of the following agency scene; and then using the interval itself to mask the final change into the domestic scene comprising the entire second, shorter, ‘half’. But then, top-notch Director Lyndsey Turner’s whole creative team – completed by Jack Knowles (lights), Christopher Shutt (sound) and Merle Hensel (costume) – all deliver drama by the bucket.

Lucy Black is strong as Joyce, Marlene’s down-to-earth sister, back in Suffolk – as we discover, towards the play’s end, raising Marlene’s illegitimate child as her own, the stress of which may have even led to the miscarriage of her own baby. Her love-hate relationship with her high-flying sister smoulders throughout the whole final scene when Marlene pays a flying visit, including a whisky-fuelled politically didactic section debating Thatcherite values and the pros and cons of “individualistic” feminism where women, whether in killer heals or pinstriped trousers, ironically all-to-oft end up mimicking patriarchs.

Young Liv Hill gives a staggeringly impressive professional theatre debut as Angie, the wild, wayward and rather immature child – of Joyce we are at first given to believe, until we learn she is in fact the daughter of Marlene, the high-flying “aunt” she has always idolised. Incredibly moving, with laser-precision technique and timing – not least in her first scene, with child friend Kit (Ashna Rabheru)!

In the penultimate, employment agency scene, Nell (Nadia Williams) and Win (Charlotte Lucas) make a fearsome, ruthless duo under Marlene’s watch, putting a string of women beneath the screws during interviews for potential jobs on their books – cutting both younger ambitious Jeanine (Naomi Yang) and older passed-by Louise (Amanda Hadingue) right down to size, before sending youthful fibber Shona (Jessica Brindle) packing too. Marlene shows the way by telling Mrs. Kidd (Roisin Rae) – who well-nigh begs Marlene to hand her newly-acquired top job over to her overlooked husband – to just “piss off”!

In light of the play’s final revelatory scene, in fact set a year earlier than the rest of the play, we are left unsure as to whether or not Marlene will end up taking greater interest in her clearly emotionally damaged and love-sick child; and with no easy answers as to what makes for a successful woman, and how to combine career and family. Just not Marlene’s way!

Today, the best part of four decades on since it was written, with a female PM again (just about) in power and “Me Too” in the news, Top Girls still seems almost strangely tragically timelessly piquant.

Top Girls runs at the Lyttleton Theatre (National Theatre) in London until 22 June 2019. For more info and to book tickets, call 020 7452 3000 or visit www.nationaltheatre.org.uk