A 2011 BBC documentary about a real-life 16-year-old drag queen called Jamie, who wanted to wear a dress to his school prom, sparked Jonathan Butterell (director and co-writer) to harness Tom MacRae (book and lyrics) and singer-songwriter Dan Gillespie Sells (music and orchestrations) to create a moving, challenging yet celebratory musical.

Everybody’s Talking About Jamie premiered at Sheffield’s Crucible Theatre (Feb 2017), before opening  at the Apollo Theatre (Nov 2017) in London’s West End and has recently (Jan 2019) undergone a major cast change.

Whereas emergingly-straight Billy Elliot has to “come out” as a ballet dancer amidst a world of striking miners, slightly older Jamie is already fully out-and-loud as a young gay man – shunned by his father, supported by his mother and friends, and with mixed reactions at school. Yet both Billy and Jamie need the same guts in the face of narrowly defined gender stereotypes; both make the world a little less insecurely conformist; both take us on a still very real and relevant cathartic, theatrically therapeutic ride.

Layton Williams gives a mega-watt star turn in the new cast, as Jamie, combining the character’s polished attention-seeking pizazz and cutting or deflecting humour with its intense vulnerability in a way that is compelling and believable. A technical and emotional tour de force!

His mum, Margaret, normally played by Rebecca McKinnis, was perfectly filled by rock-solid and wonderfully warm understudy Melissa Jacques the evening we saw the show. Her “If I Met Myself Again” and “He’s My Boy” solos, plus “My Man, Your Boy” duet with Jamie, brought the house down!

Sejal Keshwala shines as gutsy, feisty Ray – not so much family friend, more actual family, in the true sense. Charismatic entertainment veteran Shane Richie is perfectly cast as Hugo, the character who comes back as ‘drag legend’ Loco Chanelle to help Jamie find him/herself and prepare for a first drag show and then the climactic school prom – both of which actually cleverly happen off-stage.

Hayley Tamaddon makes a suitably jaded and uptight careers teacher, Miss Hedge, reflecting the conservative views of a wider world until her epiphany, albeit under pressure, at the very prom doors!

In her West End debut, Sabrina Sandhu well-nigh steals the show as Jamie’s closest friend, quiet unassuming fair-minded Muslim girl, Pritti Pasha. Her “It Means Beautiful” number deserves to become a standard! The two make an effective odd couple, both battling prejudice on different fronts – both with electrifying moments, and one-liners, where they stand up to, and expose, the ignorance, and insecurities, of their bullies.

Speaking of which, Luke Baker is excellent as bully-in-chief, Dean – ultimately an object of pity, becoming more and more isolated as Jamie and Pritti win over their school – his final self-realisation, enlightenment and almost-acceptance of Jamie both touching and inspirational. It also takes guts to change, and accept love and forgiveness, with grace. 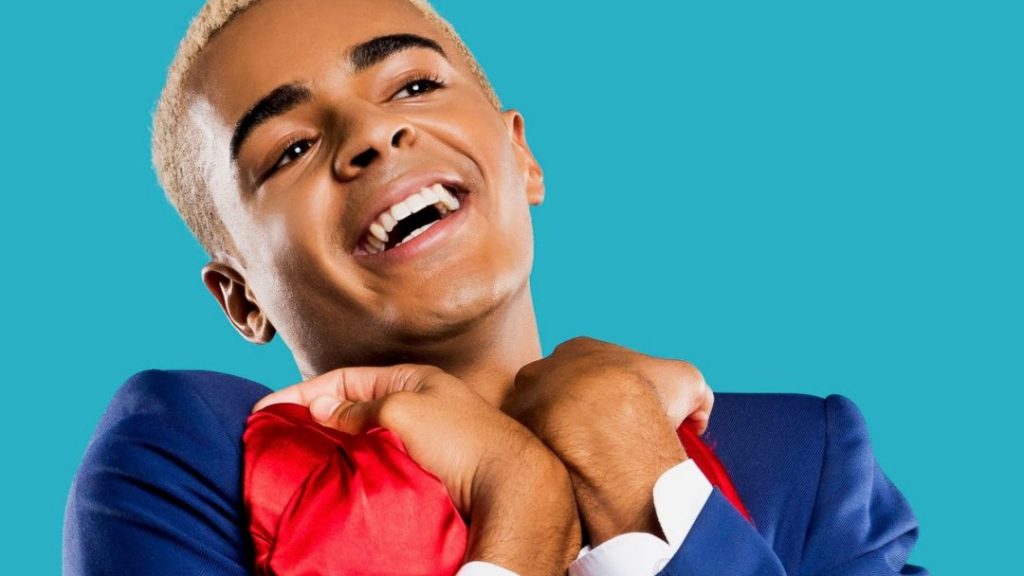 The energy and discipline shown by this young cast as they dance Kate Prince’s superb streetwise choreography or sing Dan Gillespie Sells’ oft gloriously close harmonies – not to mention catchy numbers like “And You Don’t Even Know It” and eponymous “Everybody’s Talking About Jamie” – really mark this show out, its 2 hours 40 minutes simply whizzing along!

The amazing 7-piece band are up in an onstage rear gallery throughout, under the rapt musical supervision by Theo Jamieson.

It’s no surprise there’s a 2020 tour already in the pipes.

Everybody’s Talking About Jamie is running at the Apollo Theatre in London.