Still abuzz with last year’s celebration of the life and still-very-living work of its most famous son, 400 years after his death, you hardly need another reason to visit Stratford-upon-Avon. Yet here are five!

This is the site where Shakespeare lived with his family, writing many of his late great plays including The Tempest – from 1597 until he died here in 1616. Although the original structure was demolished in 1759, it is only now that recent archaeological excavations have been completed that the site has reopened so that visitors can glean the new findings in displays, plus make their own personal connection with Shakespeare as they enjoy the freshly landscaped gardens and commissioned artwork. 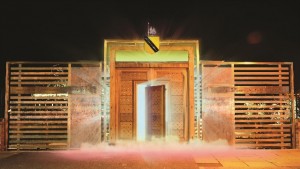 Follow in Shakespeare’s footsteps through a new entrance on the site of the original gatehouse and enjoy a contemporary landscape that reveals the footprint, and scale, of the Shakespeare family home. Elements include the restored sunken Knot Garden, with its traditional plants and shrubs; and remnants of the splendidly peaceful Great Garden. Superb indoor exhibition, too, of artefacts found on site or nearby – including what is almost certainly The Bard’s very own previously-thought-lost gold signet ring!

Open to the general public for the first time, learn about Shakespeare’s education (1571-1578) and explore the building and very room where this bright Midlands schoolboy learnt to read and write, first enjoyed touring professional theatre, and became inspired to become the world’s greatest playwright!

King Edward VI School, in Church Street, is where The Bard was almost certainly educated – where else? – when aged 7-14; and where his writing skills doubtless emerged – at the West end of the upper room of the old timber-framed Guildhall, next to the wonderful Guild Chapel! 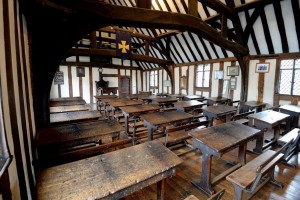 Enjoy an immersive, atmospheric and authentic experience that will give insight into how Shakespeare’s outlook and ambitions were formed by the lessons he attended in this very room – English (obviously!), the classics (which influenced many of his plots), the Christian faith (though no regular Churchgoer he), and music (many of his plays have songs); and the plays he saw here. Watch a short film! Try some Tudor homework! Even take part in a live Tudor lesson under the watchful eye of a ‘master’!

The Royal Shakespeare Company has been attracting some of its best reviews in years under openly gay chief, Greg Doran, who even sometimes directs his partner – the great actor and longstanding RSC stalwart Sir Antony Sher! And those rave critiques look set to continue into 2017, when the RSC marks 2000 years since the death of Ovid, staging Shakespeare’s four political thrillers set in and around ancient Rome, all in the main Royal Shakespeare Theatre. Julius Caesar runs 3 March – 9 Sept; Antony & Cleopatra runs 11 March – 7 Sept; Titus Andronicus runs 23 June – 2 Sept; and Coriolanus concludes the season, which is accompanied by a new free exhibition from March to September, looking at 200 years of British political cartoons inspired by Shakespeare. Stop press: If you missed the fab production of Shakespeare’s last solo play, The Tempest (ends 21 Jan, Royal Shakespeare Theatre), ne’er fear! This captivating story of magic, spells and spirits sees the skills of theatre-making combine with spectacular hi-tech ‘digital power’ – the perfect introduction to Shakespeare for families – and will be running throughout summer at the Barbican Theatre in London, 30 June – 18 Aug 2017! Fab gay actor Simon Russell Beale stars as Prospero! Dig the dishy actors playing Ariel and Ferdinand too! 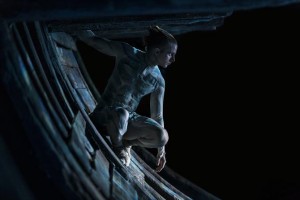 The Swan Theatre sees a new version of Chinese drama, Snow in Midsummer (23 Feb – 25 March); the world premieres of new plays The Hypocrite (by Richard Bean, 30 March – 29 April) and Vice Versa (by Phil Porter, 11 May – 29 Sept); gay great Oscar Wilde’s Salomé (2 June – 6 Sept); and Shakespeare’s epic poem Venus & Adonis (26 July – 4 Aug), the latter directed by Gregory Doran. A contemporary and sometime rival of Shakespeare, most-likely-gay playwright Christopher Marlowe (1564-1593) might never have visited Stratford-upon-Avon himself, but he’ll soon be setting the place alight via the RSC’s production of his Dido, Queen of Carthage – again in The Swan. The RSC’s first ever permanent exhibition, ‘The Play’s The Thing’, can be enjoyed in the newly restored Swan Wing, showcasing rarely-seen treasures from the archives, with plenty of interactive hands-on fun for all the family, to see how the RSC makes theatre at its best! Stop press: If you can, do try to catch the excellent and rarely-staged The Two Noble Kinsmen (ends 7 Feb, Swan Theatre) which Shakespeare co-wrote with John Fletcher, not least due to how it so comically yet powerfully pitches latent homosexuality and overt feminism against straight male chauvinism!

Ascend the 36m-high RSC Tower, adjoining the theatres, for panoramic views of town and surrounds.

It’s always worth remembering that the RSC, stunning though they are, aren’t quite the only show in town! Celebrating its 21st season in 2016/17, Orchestra of the Swan call Stratford home too! Based at the wonderful Stratford ArtsHouse, OOTS is also Associate Orchestra at Town Hall Birmingham with other residencies at Number 8 Pershore, Huntingdon Hall Worcester and Malvern Theatres.

The orchestra gives over 40 concerts annually, not just regionally, but increasingly throughout the UK, and overseas – including to New York, at Carnegie Hall on 26 Feb 2017, with handsome, charming, talented young American pianist, Thomas Nickell, under the baton of energetic OOTS founder and Artistic Director, David Curtis. 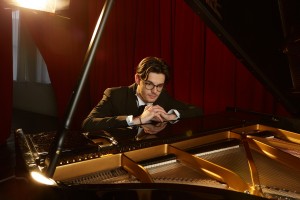 But naturally, it doesn’t all have to be new! You can still – as ever – enjoy the rest of the town’s main ‘Shakespeare Trail’, taking in key sites connected with the great writer’s life, and death. For many, Stratford’s heart and soul will always be Shakespeare’s Birthplace, the half-timbered house-with-garden where Shakespeare was born in 1564, and which stayed first in his family and then in his sister’s until 1806 – complete with more recent biographical exhibition attached, and even actors performing famous speeches and scenes from the plays! Hall’s Croft, where Shakespeare’s eldest daughter, Susanna, may have lived, is mere streets away.

Tranquil riverside Holy Trinity Church is where both William Shakespeare and Anne Hathaway are buried, and where Shakespeare was baptised – its gardens bordering the lovely swan-filled Avon.

For an earthy, multisensory slice of Tudor life, visit the vividly atmospheric, ghoulishly entertaining (think ‘Horrible Histories’) and highly informative Tudor World – housed on the site of an inn whose lusty landlord reputedly inspired Shakespeare’s great comic character, Falstaff! For relaxation, take one of the Bancroft Cruisers along the Avon. For something absolutely – arguably well-nigh refreshingly – unconnected with Shakespeare, visit the UK’s biggest Butterfly Farm, just over the river.

A mere minutes’ walk from the Swan Theatre, down some pre-show pub grub in the “Dirty Duck” (a.k.a. The Black Swan, Waterside, Stratford-upon-Avon; T: 01789 297312;). What with all the theatre crowd, not least post-show, it’s probably the closest thing Stratford-upon-Avon has to a gay venue!

Stay at the new Crowne Plaza Stratford-upon-Avon (Bridgefoot, Stratford-upon-Avon, Warwickshire CV37 6YR; 01789 279988;). The former Holiday Inn has undergone refurbishment work to transform it into a Crowne Plaza hotel. Set amid landscaped gardens beside the River Avon, all 259 bedrooms have been upgraded and enhanced, each offering views of the river and/or gardens, plus a work space and free Wi-Fi. Executive rooms provide guests with bathrobes and a minibar too. Take advantage of the hotel’s leisure club, working-out in the gym or unwinding in the sauna and heated indoor pool. Enjoy breakfast, lunch or dinner at the Riverside Restaurant, or relax with a drink or light bite to eat in the Terrace Lounge and Bar, or on the heated Terrace. Children aged 12 years and younger eat for free. It’s a mere 5 minute stroll along the River Avon to the RSC’s theatres; and the town centre is scarce a 2 minute walk away. Ace! 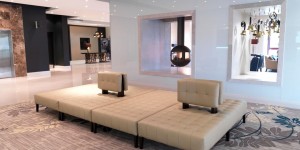