Sounds like a Madonna song? Adrian Gillan samples the natural beauty – human and otherwise – on the sultry Atlantic volcanic paradise of La Palma! A mere short flight away, with fab easyJet!

Most north-westerly, and fifth largest, of the Canaries, 100,000-populated La Palma – nicknamed “La Isla Bonita” (“The Beautiful Island”) – is a volcanic up-thrust that rises steeply from the Atlantic’s ocean floor, with about three fifths of its height actually below sea level. Formed 3-4 million years ago, La Palma is currently – along with Tenerife – the most volcanically active of the Canary Islands!

The northern part of the island is dominated by the lofty volcanic crater-rim Caldera de Taburiente National Park, topped above the clouds at 2,426m by the aptly-named Roque de los Muchachos (“Lads’ Rock”) – second in Canary height only to Mount Teide on neighbouring Tenerife. The southern part of the island consists of the Cumbre Vieja, a relatively recent ridge formed by numerous volcanic cones – some still active, but currently dormant, with the last eruption in 1971.

Known to the Greeks and Romans, and medieval Genoese explorers, the Canaries were conquered, often violently, by the Spanish throughout the 15th Century; and native Canarians (Guanches), thought to be descended from North African Berbers, were either killed, sold into slavery or assimilated into the colonising, broadly Catholic, population, many of whom were themselves drawn from Castile, Majorca, Flanders, Portugal and Catalonia. La Palma flourished as a trading post en route to the New World.

Now, roughly a fifth of its inhabitants live in the capital, Santa Cruz de La Palma (known as just Santa Cruz), on the Island’s east coast; and about a fifth in Los Llanos de Aridane, over on the west coast.

La Palma has a good coastal road circuit, plus a good inland road network with twin tunnels through the mountain linking (oft tad sunnier) Los Llanos de Aridane with (oft tad cloudier) capital Santa Cruz. Bus routes link the main towns although a hire car will naturally afford you greater freedom. The island itself is linked to Tenerife via ferry and plane and, to the wider world, by plane. 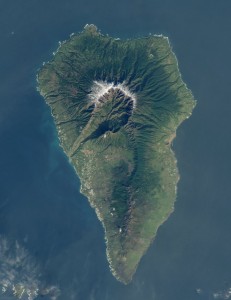 Controlled by a mild and stable subtropical semi-arid climate, agriculture (especially bananas, grapes and other fruit), fishing and tourism now power the island’s economy. La Palma has many endemic plant and animal species, including giant lizards and numerous birds. Despite widespread deforestation for farming, much of the upland areas retain ancient laurel forest.

The “sea of clouds” to the east of the mountains condenses moisture onto the forest pine needles, which collects in the ground and is channelled via man-made tunnels to irrigate the island. Due to the location and the height of its mountains, some 2,400m above sea level – and above the clouds – many international observatories have been sited on the Roque de los Muchachos, including the Isaac Newton Group (ING) of telescopes.

And, with ace low-cost carrier easyJet serving La Palma from London Gatwick, you can be on the island in no time at all – and with a little extra cash left in your pocket to spend once here! Punctual, and with highly personal, yet professional, service, easyJet always delivers what it says on the tin! We love ‘em! 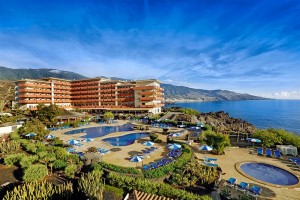 The great thing about this gorgeous island is that, once here, almost all its natural splendours are pretty much, well, free! Highlights include:

Also: loads of activities from paragliding to whale-watching; delicious cuisine and wine; plus handicrafts like silk and cigars and such! Oh yes, and it’s warm and sunny almost all-year-round here too! Ace!

It’s worth noting that there are also a few excellent smaller gay-run accommodation options in attractive old properties in the capital, such as Hotel San Telmo.

And gay gents have been known to ‘take airs’ on and above the rocky shore just south of Los Cancajos!

Plus: you may be on a remote island but, with modern dating aps, the pretty boys are rarely far away!

easyJet flies from London Gatwick to La Palma with prices starting from £36.49 per person (one-way, including taxes and based on two people on the same booking). This brill, great-value airline is punctual, offering friendly yet professional service; and boasts a vast and ever-expanding network of other exciting routes, covering much of the UK, Europe and beyond.

By Adrian Gillan for Bent.Com