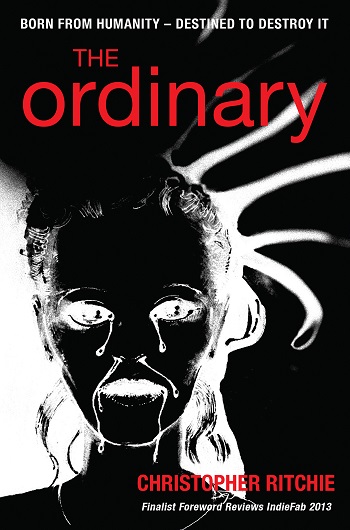 As his second novel, ‘The ordinary’, hits the shelves, Christopher Ritchie has marked himself out as a rising star in fiction. We talk to the up and coming author about his work and the illness he battles every day

With a million books published every year, the reader’s world has become considerably more complicated than it once was. Just how can someone separate the wheat from the chaff and get straight through to the good stuff without the age-old problem of trial and error?

This is the quandary facing indie publishers all over the world, trying to rise above the level of amateur vanity projects in a world traditionally controlled by a small number of literary giants. Take author Christopher Ritchie as an example. Publishing his debut, ‘House of Pigs’, with small indie start-up GBPublishing.org in 2013, it was a baptism of fire for both, as Ritchie explains: “You write a book and expect the earth. You wonder why people are buying just about everything else but your work, and obviously that can be soul-crushing, but you just have to believe in yourself and keep plugging away.”

Getting noticed has a lot to do with luck, Ritchie believes, but actually writing something people want to read is surely the bedrock. “Absolutely. But I’ve often said that it doesn’t matter if your book is the best thing ever if no one knows about it. And that’s a shame for a great many authors. Fortunately for me, I have been noticed, and I’m hoping this second book takes me up to the next level.”

It helps that his second novel, ‘The ordinary’, plugs straight into the zeitgeist. Indeed, with the main theme being the viral spreading of fear via the media in a world where pornography has become commonplace, it’s not all that far-fetched for a horror story. “I find the real horror is there for all to see,” Ritchie says. “The news now compared to five or 10 years ago is really so much more aggressive and depressing. We’re fed large helpings of gruesome discovery every day and that’s just not good for the mind.

Ritchie describes it as a virus and reckons it’s spreading worryingly fast. “It is! You’ve got 10-year-olds with smart phones exchanging this stuff in playgrounds. They’re growing up with this mass exposure to what is essentially dehumanising women, making sex something dark rather than enjoyable, and they’re indirectly feeding an industry which is purely and simply exploitative. I’m fascinated but absolutely disgusted by that world.”

There is some light in the darkness though. ‘The ordinary’ is an allegory-laden satire, with impressive character development, twists, and a hefty dose of black comedy. For this author, a journalist and musician based near London, staying clear of the bookshelf actually helped to reel in his writing style. “I don’t actually read books myself as my day job involves a lot of reading. I honestly have no idea what other people are writing as I haven’t read a book in about 15 years! The style of my books is more like TV: I like to keep scenes concise, drip-feeding the reveals and then changing things up when the reader least expects it.”

Ritchie has also, as with his first book, produced an original soundtrack to accompany ‘The ordinary’: electronic and eclectic, it’s a compelling mix of moody, epic soundscapes and just about as many twists as the book itself. This is an unusual approach to telling a story, isn’t it? “I’ve been making music since I was a toddler,” Ritchie smiles. “And it seemed like a good idea, as I didn’t know of anyone else doing music for their books. It’s free too. I spent a lot of time crafting these songs to complement the story, and I’m confident that they do.”

Ritchie is also hoping to use his work as a platform to raise awareness of a condition he’s suffered for eight years. “I have M.E. It’s a really nasty thing to have because people can’t see it. In the 80s they called it yuppie flu but it’s far worse than that and not helped at all by a backward medical profession which has categorised it as a mental health issue. It isn’t at all.

“The way I describe it is like having the worst dose of flu and a hangover, every day. It’s not just tiredness. M.E. is a monster of shifting symptoms and severity, but always just there, eating away at you. The tide is turning now though, as doctors are at last beginning to accept it’s a physical illness as research has proved, but there’s a long way to go until we get any decent level of care. I hope to be able to do something about that when I’m rich and famous!”

That ambition can’t be far off now. With reviewers seemingly captivated by his weird worlds and a keen eye on some of the darkest clouds on the horizon, Christopher Ritchie is a rising star to watch.