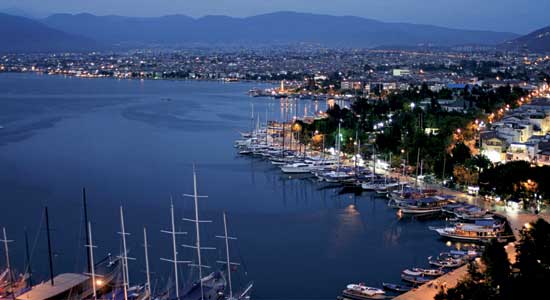 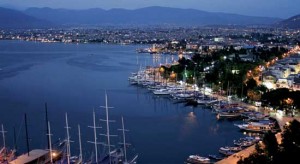 History, culture, nightlife: Adrian Gillan flies Monarch to Dalaman and falls in love with nearby Fethiye, jewel of the Turkish Riviera…

On a beautiful peninsula where the Aegean meets the Med, Fethiye is one of Turkey’s most dramatically beautiful resorts, famous for its history plus its modern, friendly, well-nigh Bohemian, feel. And nearby Dalaman airport is only 3½ hours away by Monarch from Birmingham, Manchester, Leeds-Bradford, London Luton or London Gatwick airports.

Modern Fethiye, with its 80,000 local inhabitants in Turkey’s Mugla Province, is built on the site of ancient Telmessos – named after a supposed demi-god son of Apollo, a god who himself had an oracle here – the most important city amongst the Lycian peoples. The town has since passed through many hands including the Persians, Greeks (Alexander the Great), Romans, Arabs, Turks and Ottomans, changing name several times until renamed ‘Fethiye’, in 1934, in honour of Fethi Bey, an air force hero. 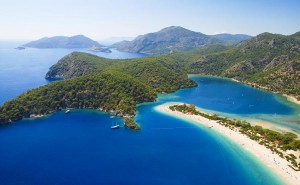 The metropolitan area of Fethiye stretches inland from the harbour, incorporating several villages. To the north lies Çaliş Plaji (main beach) where many hotels are based. To the east lie Gunlukbaşi, Çamkoy, Cumhuriyet and Esenköy. To the south lie Kayaköy and Öludeniz, with its ‘Blue Lagoon’.

In the past decade or so, Fethiye has become beloved by Brits – attracted to its climate, natural beauty, less expensive lifestyle and friendly locals. Over 7,000 Brits now permanently live here, with 100,000s more visiting every summer. Moreover, despite lacking any gay-exclusive venues, its relaxed and liberal way of life also attracts a significant number of Turkish and foreign gay tourists.

Money: 4 Turkish Lira = £1 approx. Time difference: GMT +2. Flight time from UK: 3½ hours. Dalaman airport lies 40 miles North West of Fethiye, connected by regular Havas/Muttas buses (10TL each way). The best/cheapest way to get around town, and the region, is by ‘dolmuş’ – a shared taxi following a fixed route. Inexpensive tourist visas can be easily bought in advance online; or at the airport on arrival. Note: Don’t be at all surprised if you’re woken, occasionally, by the odd, very mild, earth tremor, as continental plates gently shift and collide! Fethiye has experienced many earthquakes over the centuries, the most recent significant ones back in the 1950s/60s.

There are hundreds of accommodation options in Fethiye, from excellent budget Fethiye Guesthouse, scarce 50m from the marina – with its own sexy young staff, fab breakfasts and sea-view terrace bar – right up to a fair few 5-star resorts.

More than just beaches and bars! Some musts, most easily accessible on foot from the marina/harbour: 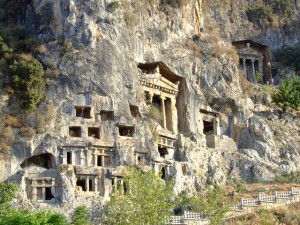 Liberal Bohemian Fethiye is popular among Turkish gays, not least in summer. Although, there are no gay-exclusive, or even overtly gay-wooing, venues in Fethiye, one or two are known to be gay-frequented. Mango Bar (29 Hamam Sokak 29;) is a small indoor dance club with a young local crowd, mainly Turkish music and resident drag artist, Pasha. Note: Run by two English guys for the last decade, Kismet Bar (harbour, opposite the Culture Centre;) has sadly been under threat from developers of late, but its courageous owners vow we haven’t quite heard the very last of it, or them, just yet!

Gents have been known to “take airs” of a night amidst the eastern stretch of harbour waterfront park; or around the shingly far northern end of Calis Beach, near the last dolmuş stop. As ever, beware.