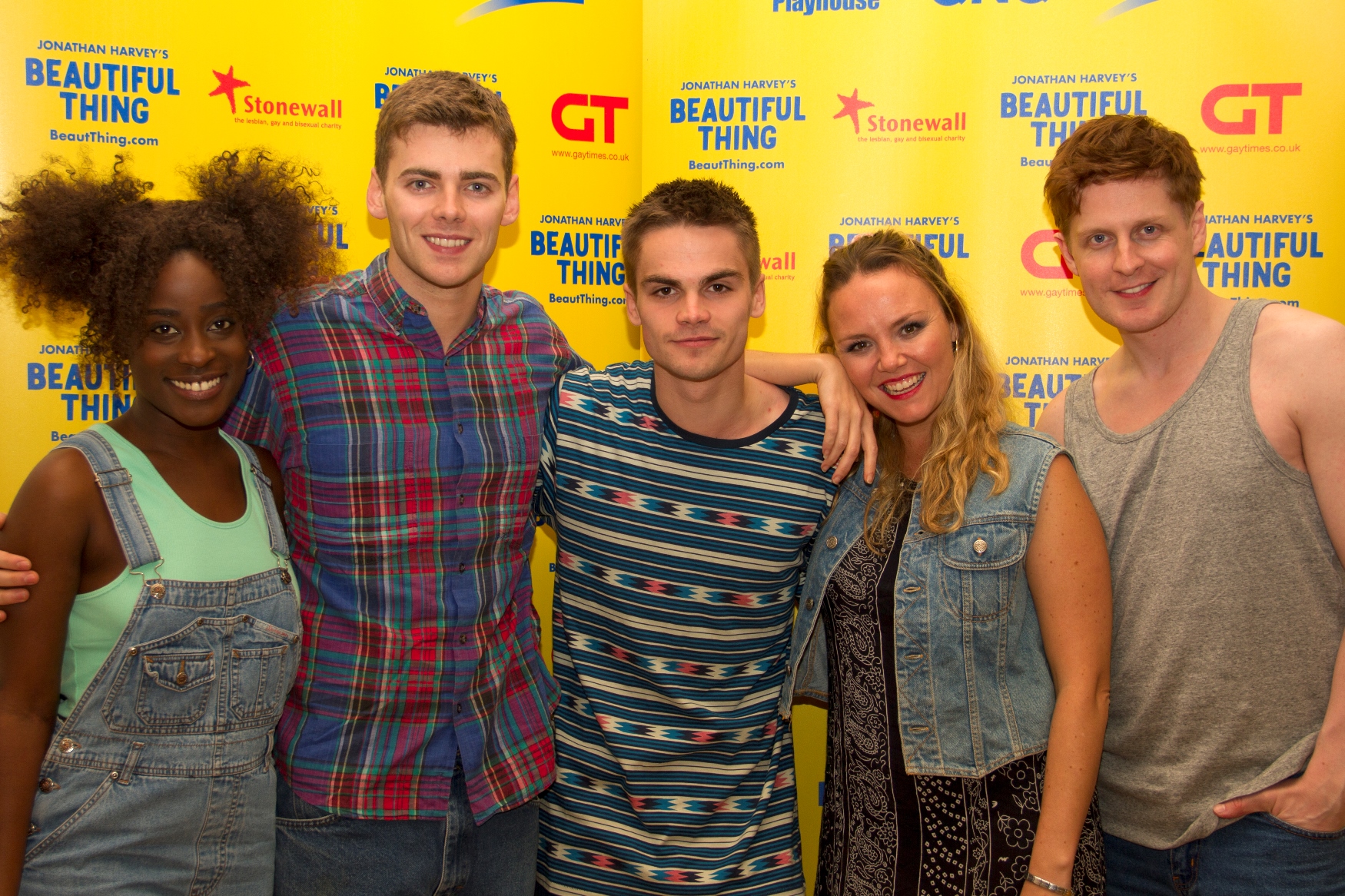 Full casting has been announced for Nikolai Foster’s celebrated anniversary production of Jonathan Harvey’s Beautiful Thing, which will return to the UK in 2015 with an 18 week UK tour, opening in Canterbury in March, then visiting Birmingham, Manchester, Nottingham, Northampton, Leicester, High Wycombe, Cardiff and Brighton, with a West End run to be announced.

The producers of Beautiful Thing have partnered with Stonewall, and will raise money for the charity’s No Bystanders campaign with bucket collections in every venue.

Ruth Hunt, Chief Executive of Stonewall, said, “Beautiful Thing is one of the iconic screen plays of modern gay culture. We’re absolutely thrilled that the UK wide tour of this fantastic production will take this heart-warming story to a new generation whilst also raising money to support Stonewall’s work to tackle bullying in Britain’s schools”

Stephanie Sirr, Chief Executive of Nottingham Playhouse said, “We are proud to be co-producing Beautiful Thing, a wonderful moving, funny and uplifting love story.   We’re also delighted to be working in partnership with Stonewall to support their campaign to combat homophobic bullying in schools.”

Casting is now complete: best known as series regular ‘Kris Fisher’ in Channel 4’s Hollyoaks most recently seen on screen in BBC2’s The Fall, and on Netflix’ epic Titanic: Blood and Steel, Gerard McCarthy will star as ‘Tony’.  Other theatrical credits include The Merry Wives of Windsor at the Globe, and Blue/Orange for ATG. Vanessa Babirye, recently seen on screen in BBC 2’s Our Girl, and at the National Theatre in Romeo and Juliet will star as ‘Leah’. Also joining the company will be Rob Ellis and Natalie Law.

Multi-award winning actress Charlie Brooks, best known for her role as ‘Janine Butcher’ in EastEnders, will lead the cast as ‘Sandra’. Other notable credits include ‘Jenny’ in Bleak House, winner of Strictly Come Dancing, I’m A Celebrity, Get Me Out Of Here!, and a critically acclaimed stage performance in Our Country’s Good (Liverpool Playhouse). Thomas Law, whose roles include ‘Peter Beale’ in EastEnders, ‘Matt Haddon’ in Casualty and most recently as a young Simon Pegg in blockbuster film The World’s End will star as ‘Ste’. Sam Jackson, whose roles include ‘Alex Henley’ in Skins (E4), ‘Jack’ in Drifters (E4) and a critically acclaimed performance as ‘Billy Casper’ in Kes (Derby Theatre), will star as ‘Jamie’.

Jonathan Harvey wrote beautiful thing when he was just 24. It premiered at the Bush Theatre in 1993 and sold out its five-week run before transferring to the Donmar Warehouse, and then the Duke of York’s, eventually winning its author an Olivier Award nomination and the John Whiting Award. A screen adaptation of the play was released in 1996 by Channel 4 films, which went on to be a cult hit. Jonathan is  a regular writer for Coronation Street and wrote the TV hit series Gimme, Gimme, Gimme, as well as the best-selling 2012 novel All She Wants.  His plays include Canary and Corrie!

Over its 20 year history, the play has featured in the careers of many famous actors including Jonny Lee Miller, Suranne Jones, Hugh Bonneville, Philip Glennister, Andrew Garfield, and Rhys Ifans, and has been produced over 25 times worldwide, with international dates in China, France, Canada, Australia and Holland.