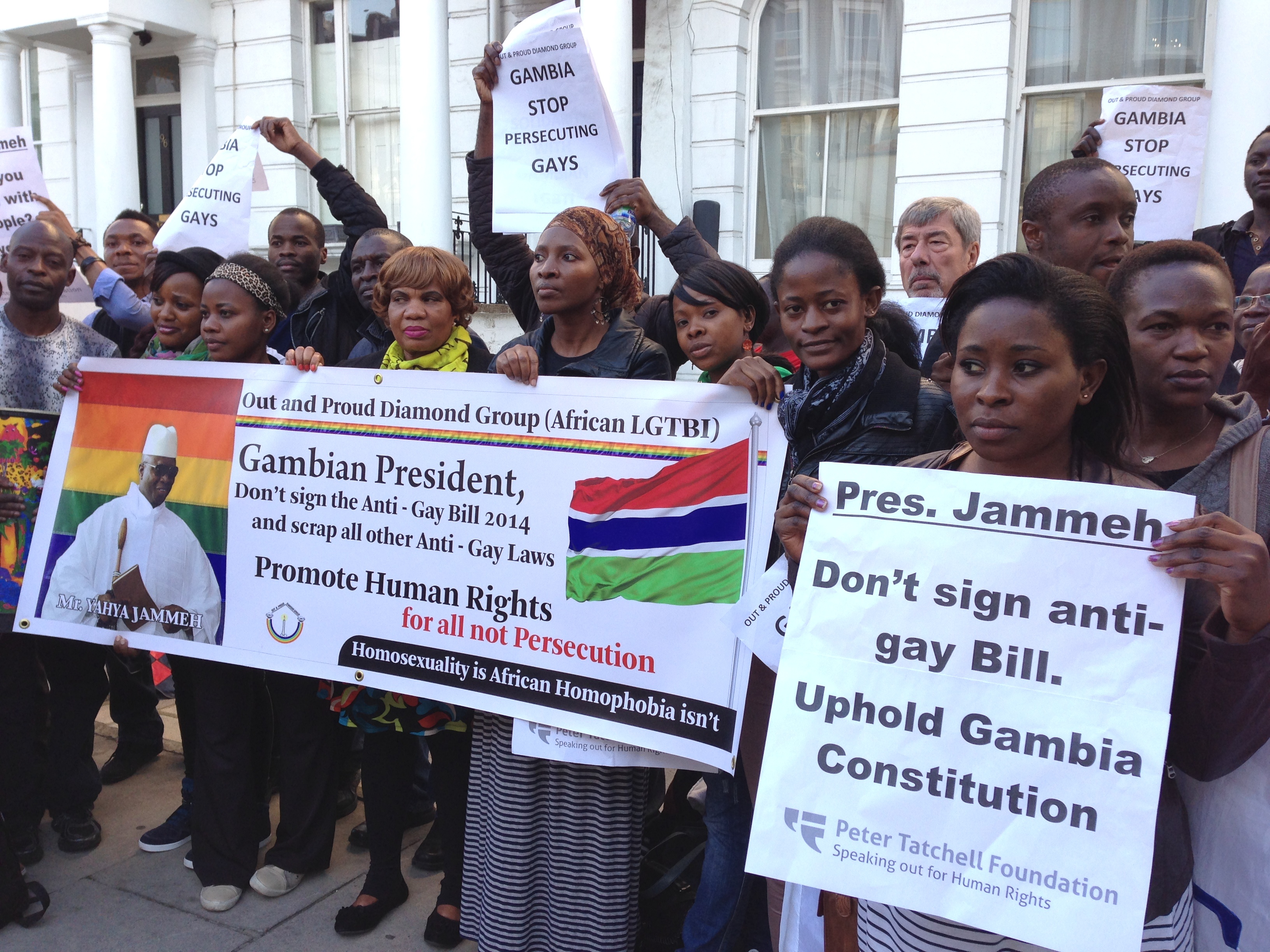 African LGBTI activists and their British allies have urged the Gambian President, Yahya Jammeh, not to sign the new anti-gay Criminal Code (Amendment) Bill 2014, which was passed by the National Assembly on 25 August. The say it violates the Gambian constitution.

Sections of the Bill are similar to the provisions in Uganda’s now annulled Anti-Homosexuality Act.

The new law makes “aggravated homosexuality” punishable by life imprisonment. Among those who could be given a life sentence are LGBTI “repeat offenders” and people living with HIV who are LGBTI.

And please email a letter of protest to the Gambian ambassador via this page: sexie gay men

Wednesday’s London protest was organised by African LGBTI organisation Out and Proud Diamond Group, supported by the Peter Tatchell Foundation.

Modou and Ousman (not their real names) are two Gambian gay men who attended the London protest.

Modou said:   “Life is horrible for LGBTIs in Gambia. There’s no freedom to be yourself. Before Jammeh came to power there were anti-gay laws but most people weren’t homophobic. The president is using homosexuality as a scapegoat issue to direct public attention away from his economic and human rights failures. He brainwashes society by using Islamic leaders to escalate the issue as a religious matter.”

His colleague Ousman says LGBTIs face twin threats from the law and from homophobic mobs: “Because of religion, people hate homosexuals. Once they know, you can be killed by the community. Jammeh has empowered the public and Islamic clerics to kill LGBTIs. You can be beaten to death, beheaded or stoned. They regard us as people with mental problems and possessed by demons. You live in constant fear of your life.”

The Gambian Bill has been condemned by Amnesty International: http://bit.ly/1DtAkPZ

And by Human Rights Watch: http://bit.ly/1rGKmnT

“President Yahya Jammeh of Gambia is likely to sign the bill into law. However, we hope he might have a last minute change of heart and return it to the National Assembly for amendment to strike out the anti-gay clauses,” said Peter Tatchell, Director of the Peter Tatchell Foundation.

“We urge the Gambian President to uphold his country’s constitution and its international treaty obligations by refusing to sign this Bill into law,” said Mr Tatchell.

See articles 17 and 33 of the Gambian constitution:

And articles 2 and 3 of the African Charter on Human and People’s Rights:

And the African Commission on Human and Peoples’ Rights resolution 275:

Edwin Sesange, Director of the African LGBTI Out and Proud Diamond Group, said:

“Our rally called on President Yahya Jammeh of The Gambia to:

4. Respect and implement Sections 17 and 33 of the Gambian Constitution

5. Comply with Articles 2 and 3 (equality and non-discrimination) of the African Charter on Human and Peoples’ Rights.

6. Adhere to the Universal Declaration of Human Rights

7. Uphold the African Commission on Human and Peoples’ Rights 2014 resolution on Protection Against Violence and other Human Rights Violations against Persons on the basis of their real or imputed Sexual Orientation or Gender Identity.

8. Follow the religious values of love, compassion and non-violence.

“We also urge the African Union, United Nations, European Union, business leaders and international statesmen to speak out against this bill and against all other anti-gay laws in Gambia,” added Richard  Banabakintu, the coordinator of the protest.

Background to the new Bill:

Under current laws, homosexual acts are already punishable by up to 14 years in prison in Gambia. Since 2005 this criminalisation has included sexual acts between women, as well as between men.

Gambian President Yahya Jammeh said in May 2008 that laws “stricter than those in Iran” against homosexuals would soon be introduced. He vowed to “cut off the head” of any homosexual caught in the country.

On 15 May 2008, Jammeh gave homosexuals 24 hours to leave the country. He commanded “all those who harbour such individuals to kick them out of their compounds” – noting that a mass patrol will be conducted on the instructions of the [Inspector General of Police]. Jammeh also ordered the director of the Gambia Immigration Department to weed out bad elements in society, including LGBTI people.

In June 2008, two Spanish men alleged to be gay were arrested by Gambian police and detained at Kotu police station. The men were subsequently released, reportedly only after the Spanish government intervened.

In 2012, the authorities arrested 18 men and two women during a raid on a nightclub. They were charged with attempting to commit “unnatural acts” and “conspiracy to commit a felony.” Their pictures and names were displayed in the newspapers. The charges against them were eventually dropped due to a lack of evidence.

On 27 September 2013 at the United Nations General Assembly, Jammeh declared: “Those who promote homosexuality want to put an end to human existence, it is becoming an epidemic and we Muslims and Africans will fight to end this behaviour.”

In February 2014, he stated: “We will fight these vermin called homosexuals or gays the same way we are fighting malaria-causing mosquitoes – if not more aggressively.”

In May 2014, President Jammeh threatened Gambians seeking asylum as a result of discrimination on the basis of their sexual orientation: “If I catch them I will kill them.”

Many LGBTI people in Gambia have been harassed, intimidated, discriminated and abused. Others have fled the country for their own safety.