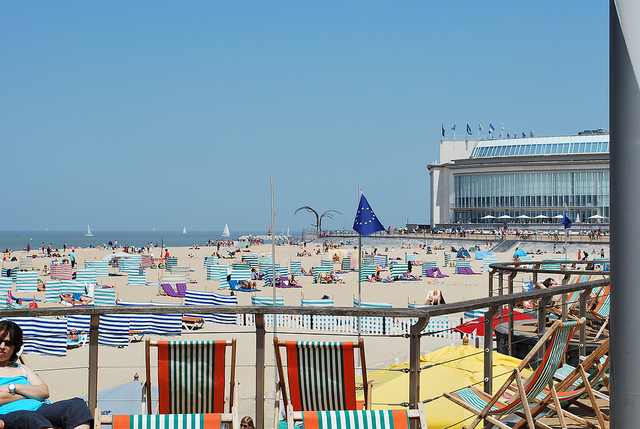 The Belgian Brighton? Adrian Gillan jumps on Eurostar and falls in love with Ostend – ‘Queen of the Belgian Coast’ – also taking in grand capital, Brussels, along the way…

And there’s obviously no faster, greener or easier way of reaching either city than via Eurostar, taking you – plus your generously proportioned baggage – from the centre of London direct to the centre of Brussels, and your hotel, is scarce two hours; and then – not least with an inclusive Eurostar ‘Any Belgian Station’ ticket – on to Ostend in just a tad over one hour more! A kind of Belgian Brighton!

Base yourself at the stylish boutique Avenue Beach Hotel (Koninginnelaan 27, 8400 Ostend; T: +32 59 80 55 44;) with its light-and-airy yet fun and quirky maritime design, including beach huts and deck chairs on the rear lawn; plus relaxing wellness spa “villa”. Many of Ostend’s attractions are absolutely free – most obviously the vast, wide and gloriously sandy beach and North Sea; but also the boat-brimming harbour and marina, and impressive seafront promenade – dominated by its eye-catching ‘Rock Strangers’ sculpture and modern Kursaal entertainment complex, plus grand old Thermae Palace (hotel) and elegant walking ‘galleries’.

Note: Keep an eye out for eateries participating in the ‘A l’Ostendaise’ project whereby chefs utilise some more unusual local catches in their seafood menus.

Ostend punches well above its gay weight for a town of this size, with all venues concentrated very close to each other, slap bang in the centre. Try any of the many stylish-yet-ambient café-lounge-bars in town, like Bar La Bar (Hertstraat 20); Cycloon (Bonenstraat 111); De Strano (Kapucijnenstraat 40); Ding Dong (Groentemarkt 15); Recto-Verso (Sint Franciscusstraat 14); ’t Pleintje (Petrus en Paulusplein) or Your Place (Aartshertoginnestraat 12;). For something perhaps a tad cruisier, try Bonaparte (Ooststraat 55) or Valentino (Kaaistraat 21). Additionally, keep a look out for social and other activities organised by excellent local LGBT community hub, Rainbowhouse Polaris Ostend . From mussels with chips to muscles with zips, if visiting Ostend, you’ll doubtless want to spend at least a day, en route, in Belgium’s capital Brussels – both cities just 1 ¼ hours apart by regular local train, return fare included in your main Eurostar ‘Any Belgian Station’ ticket for Brussels!

Settle into the fun Vintage Hotel (Dejonckerstraat 45, 1060 Brussels;) with its retro style and nice café-bar, in a trendy district just east of centre. You can even ‘glamp’ out in a flash old camper van in the courtyard – for extra fun!

Cute young Eurobods and Franco-Flemish lads well and truly pout and sprout in Brussels’ bijou café-bars, not least around the Old Town, with its famous pissing-boy fountain, the Menneken Pis, and expansive, cobbled medieval Grand Place. Paris minus the bustle, this intimate city has all that phallic Gallic continental charm, but on a very human scale.

Buy a great-value Brussels Card (for 24/48/72-hours) for access to many top local attractions, plus local transport.

Check out some of Brussels’ many other characterful districts. Window-shop in the trendy Dansaert fashion zone; browse for art in the galleries of Sablon; or take in gorgeous Art Nouveau sites in chic Chatelain.

Behold: yet more variety on the scene – this time for those all hot ‘n bothered, beleathered or booted-up with nowhere to go! Manly men head for the all-male oft-nude likes of Stammbar (rue du Marché au Charbon 114; – also hub for Brussels Bear Pride) or Duquesnoy (rue Duquesnoy 12;). But it is well worth planning your entire Brussels weekend around La Démence (rue Blaes 208;) – the country’s biggest gay club night that materialises ad lib – check their website – about once a month!

If you still fancy letting off steam, day or night, Macho sauna (rue du Marché au Charbon 106; ) is one of the largest, most central and established wet joints. Or gents oft “take airs” in the Parc de Bruxelles – not least amidst sunken shrubs near the pond facing the palace!

GETTING THERE WITH EUROSTAR

Eurostar operates up to 9 daily services from London St Pancras International to Brussels Midi and, from there, passengers can use their ‘Any Belgian Station’ ticket to connect on to local services to their final destination, such as Antwerp, Ghent, Bruges or Ostend. Fastest London-Brussels journey time is 2hrs. ‘Any Belgian Station’ tickets cost from £79 return (or from £69 return, to/from Brussels only). Tickets are available from Eurostar’s website or 08432 186 186.

Eurostar travellers to Paris, Brussels and Lille can also take advantage of 2 for 1 entry into paying exhibitions and permanent collections at some of those cities’ most popular museums and galleries, all by simply showing their Eurostar tickets on entry. Participating Brussels galleries include Bozar, the Royal Museums of Fine Arts of Belgium and the Magritte Museum.