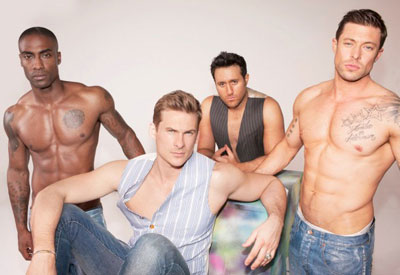 Get ready to scream, faint and behave like a loved-up teenager because Brighton Pride are pleased to announce that the multi-platinum selling, award winning and completely gorgeous boy band Blue will be performing on the Pride Main Stage at Preston Park.

Yes Anthony Costa, Lee Ryan, Simon Webbe and Duncan James will be strutting their glorious boy band selves for Pride and we can’t wait. Blue have sold over 15 million records worldwide, enjoyed three No.1 albums, numerous Top Ten singles, sell out tours as well as performing live with the likes of Elton John and Stevie Wonder. Teenage heartthrobs and poster boys for so many they are a now older, wiser and stronger, stepping gracefully into manhood with charisma, style, charm and camaraderie. With the help of the occasional Attitude Magazine Naked Issue cover shoot of course!

So, with only three months to go until the UK’s most spectacular and flamboyant Pride returns, Brighton Pride looks set to break fundraising records with early bird ticket sales the biggest ever seen.

With loads more headline acts to be announced in the coming weeks those confirmed so far and joining Blue on the main stage are: Pussycat Doll Kimberly Wyatt, disco legend Martha Wash and the divine singer songwriter Heather Peace.

The Wild Fruit Dance Tent returns super-sized with open access and super fabulous, alongside the all-new Q Stage  with its must-see mix of live music, alt drag and LGBTQ entertainment plus headliners already confirmed, so watch this space for announcements !

The Legends Cabaret big top hosted by the wonderful Lola Lasagne is back as is the glorious Girls Dance Tent and the highly acclaimed Calabash Tent. 2014 will also see the return of the much-loved Men’s Area/Bears Tent in association with Gaydio Radio, and the wonderful Community Village and marketplace.

Alongside the partying, parading and celebrations, the parade and main stage will champion Brighton Pride’s campaign Freedom To Live, focusing on those LGBT communities across the globe who are criminalised just because of whom they love.

Grab your tickets early as they will go up at the end of May as we countdown to the UK’s brightest and best Pride begin.