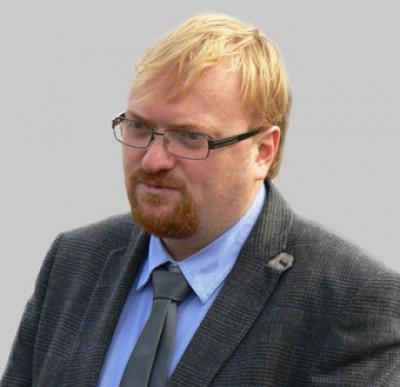 This is the face of Russia’s co-creator of their gay propaganda laws, Vitaly Malinov. A man (we can only surmise) who is so troubled by his own sexuality he finds comfort in exploiting others as a smokescreen. Not only has he taken Russia on a path of ‘cultural and moral renewal’ he now wants to rid the world of the Eurovision Song Contest, which he regards as gay propaganda. At the moment his main concern is the participation of the Austrian entry sung by Conchita Wurst, a cute, bearded drag artist, describing  him as ‘unnatural’ and that ‘Even just broadcasting the competition in Russia could insult millions of Russians.’ There have been petitions to try and get Conchita barred from the event but it also seems that a groundswell of opinion would not be averse to Russia being kicked out of the competition themselves. The rules of the ESC are that each country must broadcast the show in full or face sanctions including being thrown out of the entire broadcasting set-up. For some reason, homosexuals are facing a sudden backlash, after years of making steady progress into the realms of equality. It seems strange that some countries are suddenly adopting hate campaigns and sponsoring state endorsed pogroms against their own gay citizens. The small state of Brunei wants to stone to death its gay community. This is being given the go ahead by the country’s Sultan, Hassanal Bolkiah (pictured on the left). Several African countries have adopted hate tactics, infiltrating gay communities, beating and killing anyone suspected of any same sex relationship or even that they just ‘might be gay’. The horror is growing and we need to be aware that it is less about a singing drag act, than an all-out attack on a group of people who are being targeted and have no recourse through law to protect them.

We need to be vocal in our condemnation of all societies who would hurt our brothers and sisters, whose only crime appears to be, they love each other. Religions claim that it is an outpouring of moral outrage but the truth is that morals are not the exclusive tenure of these factions. Indeed, morals have been around a lot longer than the religions that claim them, and we know from history that religion has caused more hate and wars than just about anything else… with perhaps the mosquito, itself, is merely a carrier, claiming more deaths.

There must be a reason for all this sudden hate and we should be on our guard against those, like the mosquito, who carry it and flit around, perhaps unnoticed, passing their poison and infection from one person to another. Here in the UK we may feel we have no worries but just look at the rise of UKIP and the lunatics that appear to support them.