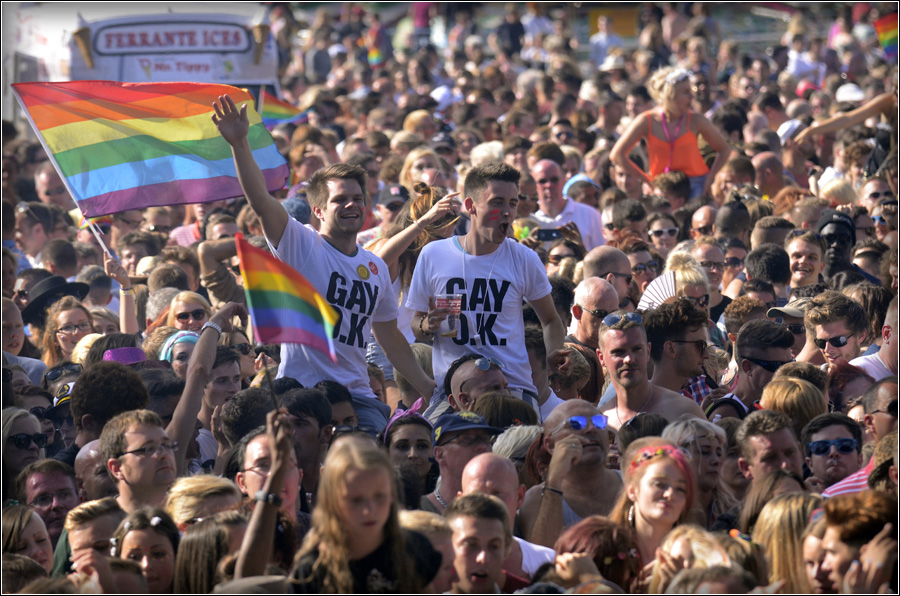 The Street Party started out as a small grassroots celebration supported by both the LGBT and business community organised independently by a group of local businesses.

However, over the last few years, as the event has grown, concerns have been raised by local businesses, the police, fire and ambulance services, the Council and, importantly, local residents about its future.

For a one-year trial, at the insistence of the statutory authorities and after many meetings with local business owners, the Pride Village Party will become an official event of the Brighton Pride weekend under the control of Brighton Pride CIC. It will take place from 6pm on Saturday 2nd August with entertainment after the Preston Park festival starting from 8pm and on Sunday 3rd August between 2pm and 8pm.

For the first time ever, the seafront road, Marine Parade, will be closed to traffic for the event, creating a unique and vibrant gay village for Pride weekend. There will be various entertainment areas including zones dedicated to cabaret, bears and disco allowing the Pride Village Party to become a safe and enjoyable event for the LGBT community and its supporters, while, at the same time, becoming a successful fundraising event for local LGBT charities and organisations for the first time.

Wristbands for the two-day event will cost just £5, with £1 going to the Rainbow fund and the remainder covering the significant infrastructure and security costs.

Cllr Geoffrey Bowden, chair of the Economic Development & Culture Committee and a ward councillor of the St James’s Street area said: “Over the years the Pride Street Party has become more and more problematic – especially for residents. Uncontrolled access and irresponsible attitudes to alcohol have turned what should be a celebration into something of a headache and, for some, a nightmare. The old format was unsustainable and has to change if the Street Party is be transformed into a safe environment for partygoers, residents and local businesses.

“Everyone needs to get behind the new approach and fully support Pride CIC’s efforts to manage the Street Party effectively to return it to an enjoyable and unique event. I hope that this one-year trial proves to be a success. If there isn’t a hundred percent support, particularly from the business community, the whole of the Pride Festival weekend could be put in jeopardy. Without sounding too dramatic, the reputation of the city as a safe place to visit is at stake.”

Speaking about the new approach, the Rainbow Fund’s Paul Elgood, who supports the Village Street Party said:  “Thanks to the success of Pride, the Rainbow Fund is able to support a wider range of local LGBT and HIV volunteer-led community groups. If the Village Street Party can add to this, then the community benefits greatly by increasing the amount available for grants.

The Pride team have a strong track record of delivering high profile and sustainable events, and a successful village Party will be a big win for both the community and local businesses.” Paul Kemp of Brighton Pride CIC said. “Traditionally the Village party’s not been organised by Pride, however after safety concerns that could ultimately jeopardised the future of the Village party and the entire Pride weekend, Pride has agreed to work in partnership with the City Council and partners to reclaim the Village party for our community and to help ensure we have a safer and controlled event for visitors to Pride and our community to enjoy.

Brighton and Hove has one of the best Pride’s in the UK and not only do we want to be financially sustainable, but we also feel that we must have a Pride with purpose and raising even more funds to help our community groups must be a good thing.

The new format has been carefully developed with the full support of the police, other blue light services and the city council. I am confident it will help deliver a safe and enjoyable event, which also respects those who live in the area. Importantly though, the Village Street Party will have a fundraising purpose, something we can all be proud of.

Reclaiming the event for the community and the safety of all those attending it is at the forefront of organiser’s minds, and while Pride recognises making an entry change may not be welcomed by some, we believe it is the only way the event can continue into a proud, safe and fundraising future”.

The proposals will be presented at a public meeting on Wed 28th May at 7pm at Dorset Garden Methodist Church (upper hall).