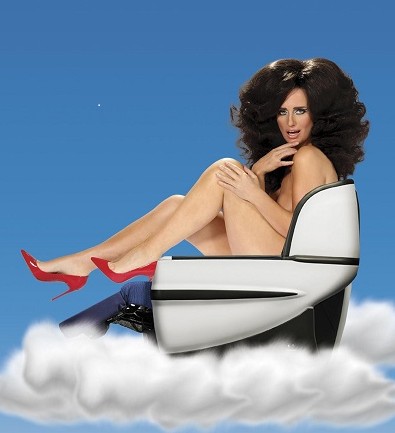 Arm the doors, cross check and buckle the f**k up, the inimitable world-class air bitch, Pam Ann jets into the UK from 21st March with her brand new show, FLY. Regional dates include Bournemouth, Salford, Glasgow and Belfast before landing in London’s West-End for a five week run at the Leicester Square Theatre, beginning on 26th March.

With enough chutzpah and insider knowledge to rival a Qantas CEO, no one – bar no one – does airline satire quite like Pam Ann. First, Business or buried up the back in ‘Cattle’, there is no part of air travel that Pam can’t negotiate. She literally has an air hanger filled with airborne commentary on the quirks of some of the biggest international airlines, as well as stereotypes commonly held about flight attendants everywhere. We caught up with Pam as she touched down in LA and repowdered her nose.

Hi Pam, it’s been a while since we saw you touring, is this because you’ve been avoiding flying on the Dreamliner?

What can we expect from you on this tour?

Fuck knows!! My shows are so improvised that they change nightly these days. I can tell you they will be filthier than ever plus I have some fucking funny brand new videos.

Have the boys in the crew been keeping you busy asking for your advice?

No… they never ask my advice

You seem to have relocated to the USA, does that mean you have done everyone… er…  I mean everything you need to do in Australia and the UK?

I am International darling I tour the world constantly NY is the best base in the world because it’s close to LA and the UK. I have a house in LA now so I am bi-sexual I mean bi-coastal! Australia is always a long fucking flight wherever you are in the world. Oh and I have done everyone worldwide.

Are there any countries you simply hate flying to?

Windy places which make landing tricky and places who beat up gays like Russia!

Who has been the most annoying passenger in your illustrious career?

All Economy passengers, they should be seen but not heard! If Lady Ga Ga was on my flight she would annoy me, she needs to fuck off to Space!

How much has the job changed since you started as an innocent member of the crew?

Once upon a time you could carve a side of beef with a big carving knife and walk through the airport with no security checks, I miss those days.

Any travel tips for those who are scared of flying?

What are your ‘must haves’ when taking to the air?

Xanax and a good bottle of red wine to wash it down over the Atlantic, along with a good lather of Elizabeth Arden Eight Hour cream, so you look flawless on arrival. Remember to always powder your nose, touch up before touch down!

Have you any Richard Branson style ambitions of starting your own celeb airline?

I hate celebrities but if I had to choose one to promote my airline it would have to be Jay Z and Beyonce! PamAfricanAir!