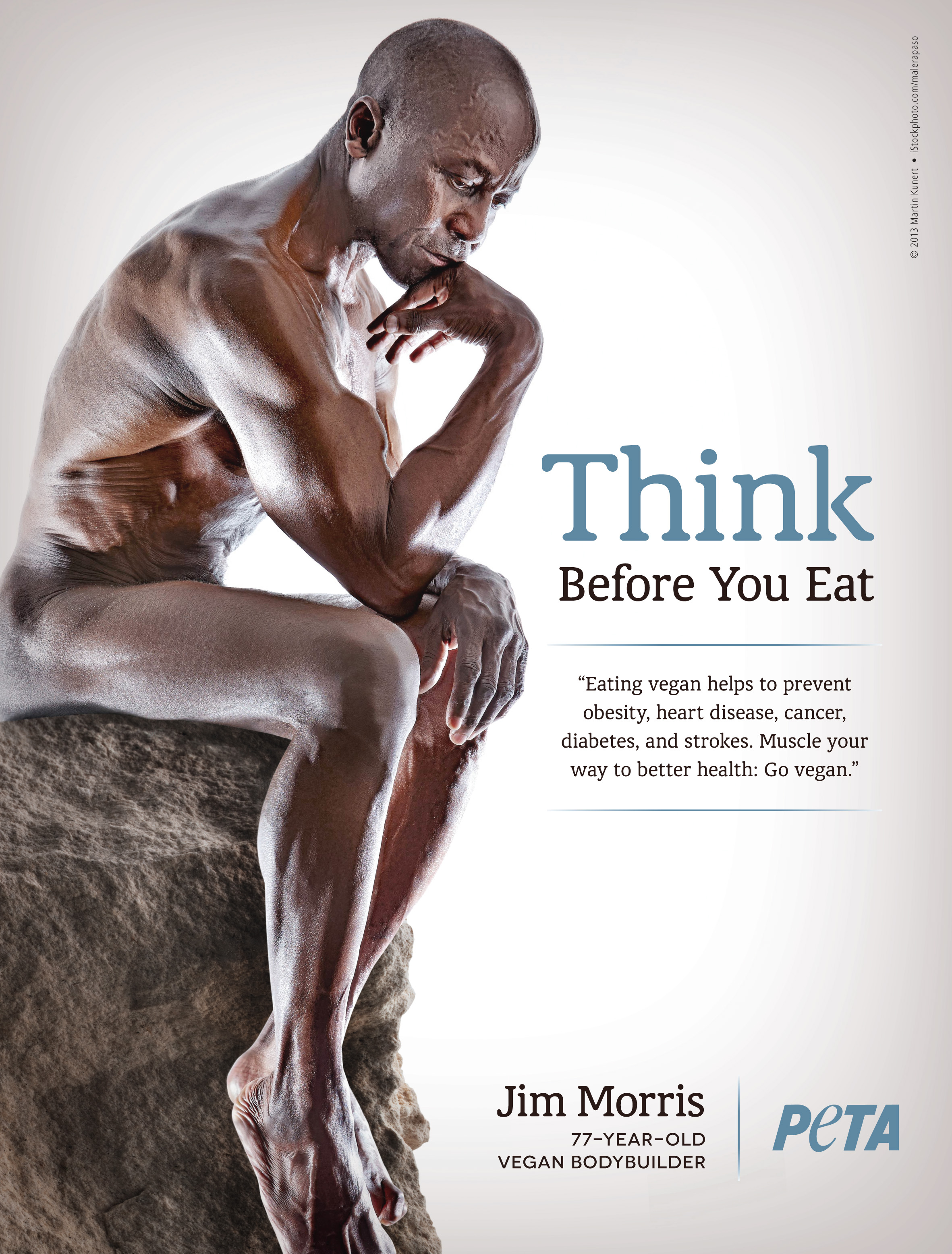 He broke the colour barrier in bodybuilding in the ’70s, and now he’s breaking the age barrier as PETA US’ most senior pin-up promoting vegan eating.

So now, having recently celebrated his 78th birthday, vegan bodybuilder Morris is releasing his brand-new PETA US campaign that proclaims, “Think Before You Eat”. The ad, which can be seen here, goes on to encourage viewers to “muscle your way to better health” – and a reduced risk of obesity, heart disease, cancer, diabetes and strokes – by going vegan.

Morris wants others to know about how his health improved after he retired from competitive bodybuilding in 1985 – because he went vegetarian and, later, vegan. “The protein in animal products is so laden with fats and chemicals and all sorts of stuff that’s harmful to you”, he says. “When I was competing and stuffing down all of that sort of stuff, I had lots of digestive problems. I was constipated and bloated and just miserable all the time. . . . I know as a fact I would not be here and I would not be in this condition now had I continued eating the way I was.” Now, Morris says he feels better than ever – and he thinks that if others dumped meat and especially dairy products from their diet, they’d feel the same way. “Milk is for babies”, he says. “Humans, as far as I know, are the only creatures that continue to drink milk once they’ve been weaned. … I think a lot of people don’t realize if they would stop drinking milk and [consuming] all of the milk products, they would say, ‘Wow, I didn’t realize I could feel this good’.” And the statistics back him up: an estimated 70 per cent of African-Americans get digestive problems from drinking cows’ milk.

People who go vegan don’t just help their own health – they also drastically reduce their carbon footprint and save animals from immense suffering on factory farms, in abattoirs and on the decks of fishing boats.

Morris joins a growing list of top athletes and other celebrities – including Mac Danzig, Russell Simmons, strongman Patrik Baboumian, Forest Whitaker, Paul McCartney and Tia Mowry – who have teamed up with PETA US and its affiliates to promote healthy and humane meat-free meals.