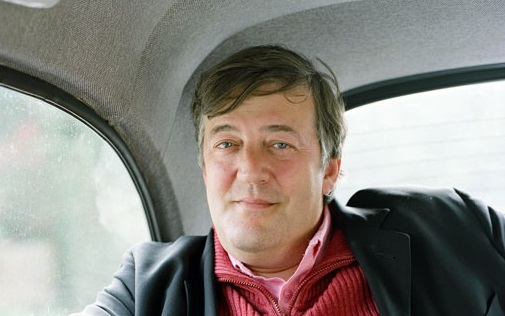 Actor, author, activist and a self proclaimed nancyboy Stephen Fry has been named the UK’s most influential man of 2013, topping a survey that polled over 40,000 males for the market-leading men’s lifestyle site, AskMen.com

Fry, the 56 year old from Norfolk, who first rose to fame in the 1980s beat Wimbledon champion Andy Murray into second place, who had another successful year on the court. In third place was Apple Inc.’s Senior Vice President of Design, Sir Jonathan Ive – who masterminded a bold new look for the operating system on more than 300m iPhones and iPads worldwide.

For the first-time, the reclusive London-born brothers, Sam & Dan Houser made the list – due to the phenomenal success of their latest video game, Grand Theft Auto V which became the fastest-selling entertainment release of all time, selling almost 30m in its first 60 days on-sale this year.

The top 10 also included the author of Game of Thrones, George R.R Martin, and the star of The Fifth Estate and Sherlock, Benedict Cumberbatch. British males also voted in their thousands for Bryan Cranston, the respected star of the critically acclaimed TV show, Breaking Bad.

Elsewhere, The Mayor of London, Boris Johnson was the most influential UK politician in 26th place, while Ed Miliband made the list at 46. Prime Minister David Cameron and Deputy Nick Clegg did not make the list.

Mike Goldstein, Publisher, AskMen, said:  “Stephen Fry’s influence has been recognised by our readers – he’s used his position and massive social reach to raise awareness of Russia’s questionable laws. As this year’s list demonstrates – it’s been a massive year for Brits internationally, with men like Sir Jony Ive and the Houser Brothers influencing society here in the UK and beyond.”