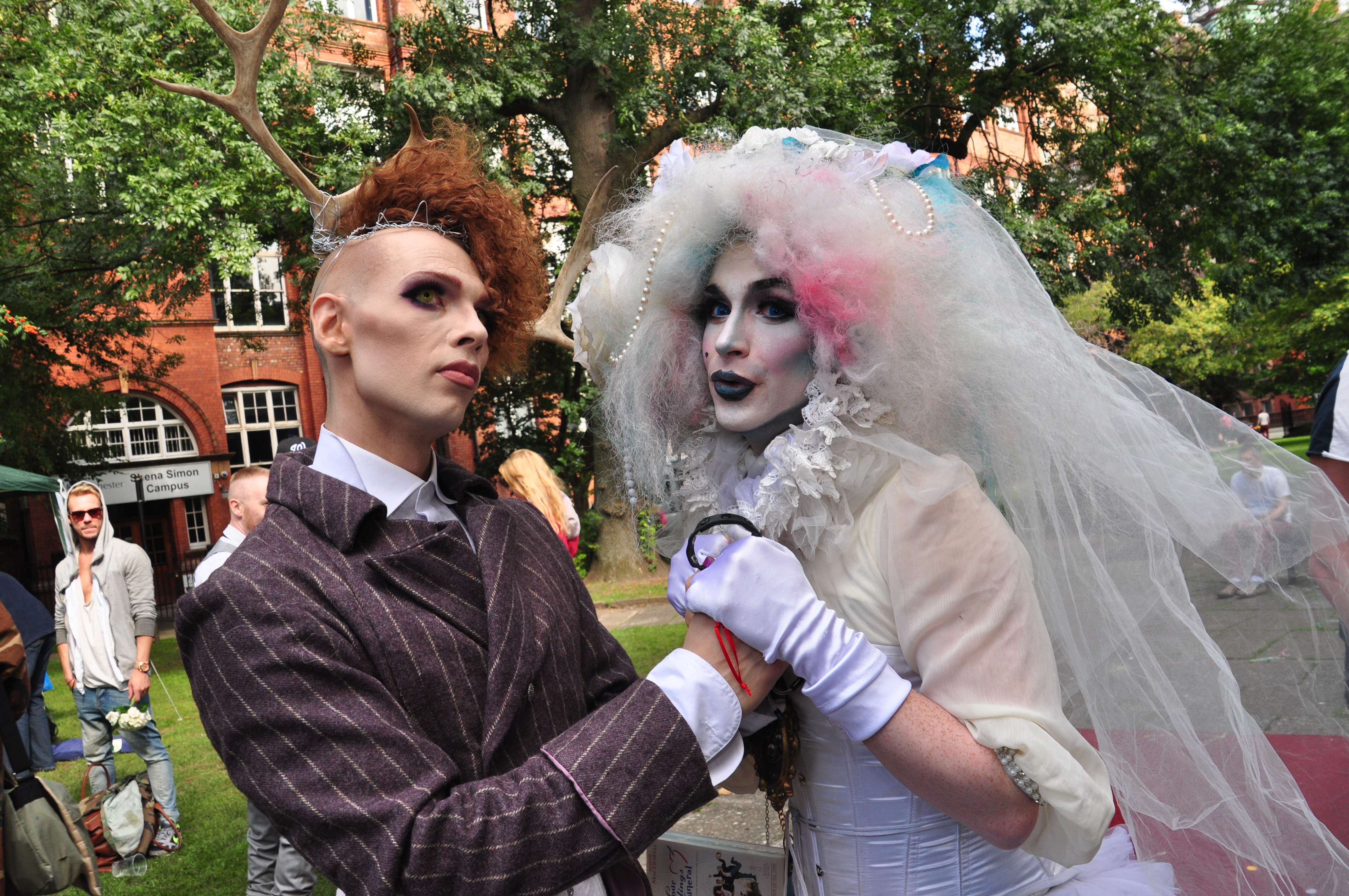 Adam Lowe writes about the intersections of marriage and pride, and how we should always do things our own way.

This year Manchester Pride Fringe spanned a full month rather than, as in previous years, just ten days. I was lucky enough to take part, as my collective of emerging LGBT writers and performers, Young Enigma, was invited to run the Manchester Pride Writers in Residence programme. As part of the fringe, then, we ran three main events: Queer Machines, Progress? and A Royal Wedding.

Queer Machines was a celebration of this year’s LGBT History Month theme of science, technology, engineering and mathematics. Okey Nzelu, who stunned audiences as one of the LGBT History Month Writers in Residence with his poignant radio play about Alan Turing, led the event, with Charlotte Henson, Joshua Mackle and Tara Ali Din.

Progress? was an examination of the 1980s, an era when most of our young writers and performers were born, and an era which has unarguably shaped the current generation and our climate of ‘austerity’. Led by acclaimed young poet Andrew McMillan, another LGBT History Month Writer in Residence, whose own ‘Progress’ poems, inspired by the work of Thom Gunn, mapped a queer trail through Manchester’s public spaces—reclaiming everyday environments from an LGBT perspective. He was joined by fellow members of Young Enigma in exploring Manchester Pride’s theme ‘Acceptable in the 80s’ as it pertains to young artists and our wider community. We partnered with City Library and Chorlton Library to host these events, which we hope is the start of a new and productive relationship between us and the city’s libraries. A Royal Wedding was a celebration of liberty, an enquiry into equality, and a satire of ritual and tradition. We worked closely with our associate artists Anna Phylactic and Cheddar Gawjus, whom we were lucky enough to have worked with on our LGBT History Month performance Pride and Prejudice (a literary parade through Manchester’s gay village), to develop this live art show. Initially the show had a more formalised script, with dialogue, cues and wedding vows. But as we worked with Anna and Cheddar, who work with drag and mime, we began to cut back the actual words and developed a show based primarily on gestures and the vocabulary of ceremony. The show allowed us to play with some of our contradictory and conflicting feelings about gay marriage, and reposition what is traditionally a patriarchal and heteronormative ritual within a queer context. The result was intense: there was much of the magic and communal spirit of marriage; but there was also the gender subversion and sense of fun inherent to drag, cabaret and queer alternative clubbing. We gently critiqued marriage while enjoying the coming together it allows.

This, to me, is what pride is all about.

Those with at least some knowledge or interest in modern history should know that the modern pride movements of the Western world arose from the Stonewall Riots of 1969. During those riots, a pissed off and indignant group of drag queens and gay men, who had grown pissed off with police harassment, fought back with stones and bricks. The following year, the occasion was marked with the first ever gay pride event.

At its heart, pride is about protest. It’s important, for me, that a ‘pride’ is also the collective noun for a group of lions. Lions are fierce, and so were the Stonewall drag queens. We can all be fierce too. When we strut our stuff in the parade, we should be lions and not sheep.

Pride is about stepping out, fearless, to show the world we exist, we are not ashamed and we are not going to go away. As the courageous pride marchers in Russia and Uganda show, pride is about resistance to oppression. And as much as we are accepted now, it is heteronormative, patriarchal culture that has oppressed us. This includes traditional family values and marriage. The aim for many protesters in those early days was not to be assimilated, but to be accepted as different but equal in the eyes of the law. It strikes me, then, that ‘gay marriage’ should similarly be different but equal. We’re not bound by what has come before, even if we choose to riff off that tradition.

At A Royal Wedding we all had fun. It was lovely to see all kinds of LGBT people brought together, regardless of labels or cliques. That’s the kind of marriage I’d be proud of. Okay, it wasn’t real, but it was in the spirit of community. And it felt like it was ours, more than any piece of paper or any kind of assimilation can ever be. There’s a very queer beauty in doing things our own way, whether we’re being serious or not. So whether we marry or not, there’s one key thing to remember: make sure you make it your own.