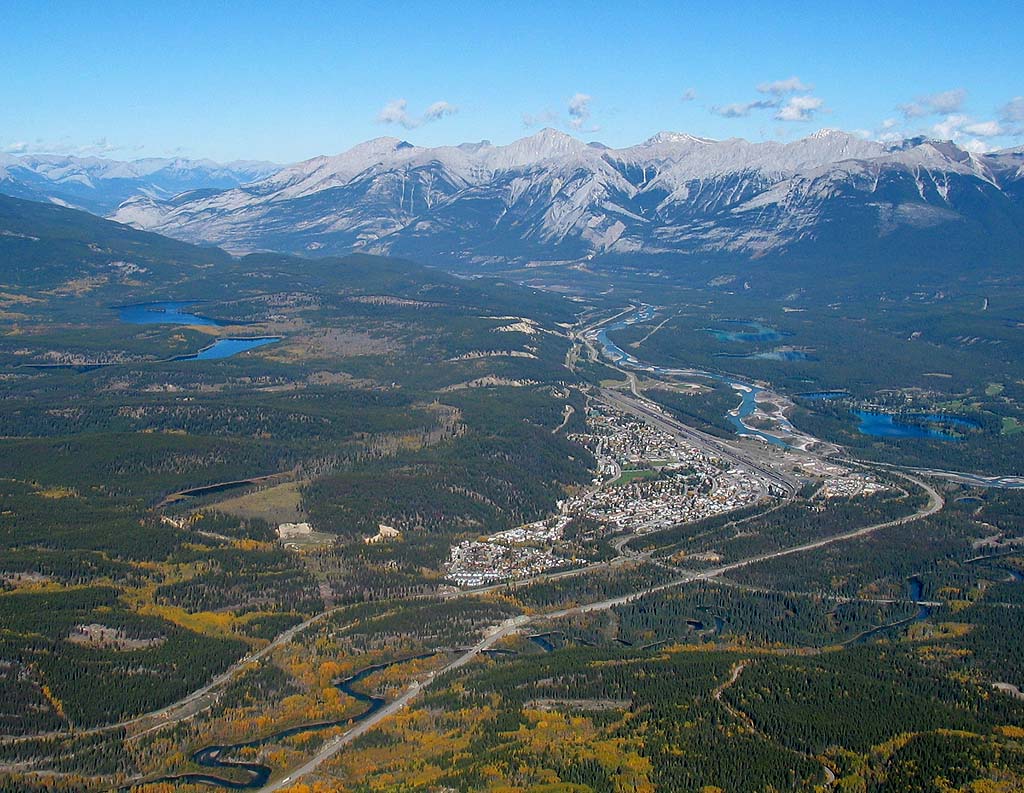 Home to the Canadian Rockies, it’s even where they shot Brokeback Mountain! Adrian Gillan visits the province of Alberta for soaring peaks in Jasper and big city buzz in capital Edmonton!

Born out of Canada’s own Wild West – where outlaws, prospectors and trappers moved amongst native peoples before the British Empire took hold, naming the province after Victoria and Albert’s daughter – Alberta has emerged as tourist-beckoning home to the majestic Canadian Rockies, with lofty Jasper readily reached in 4 hours from ¾-million-thronging high-rise Edmonton! You should definitely consider flying direct with Air Canada, in Economy or maybe even splashing out on its acclaimed Executive First product, boasting – amongst many other things, quite apart from access to those famed Maple Leaf airport lounges – lie-flat beds that fully recline at a mere touch!

Modern, chic-yet-friendly boutique downtown style palace, the Matrix Hotel (10640 100 Avenue;) offers guest rooms and luxury suites – including 8 penthouse affairs complete with living room, fireplace and wet bar – and even throws in a hearty complimentary breakfast, plus sociable wine and cheese tasting (Mon-Sat), along with a business centre, fitness room and on-site parking. With some of the most attentive staff in the business, Matrix was recently ranked 7th Trendiest Hotel in Canada in the TripAdvisor Traveller’s Choice 2012 Awards.

Or, if you prefer something a tad more corporate – and there’s now’t queer as folk – Courtyard by Marriott Edmonton Downtown (One Thornton Court, 99 Street & Jasper Avenue;) should fit your bill.

Those seeking deeper succour should head to the Art Gallery of Alberta (2 Sir Winston Churchill Square;) – a sizeable state-of-the-art showcase for international, Canadian and First Nations art, amidst award-winning architecture, not least its eye-catching zinc-clad frontage. Or they can catch an opera, ballet or big-stage show at the vast Northern Alberta Jubilee Auditorium (11455 87 Avenue) – the resident Alberta Ballet a must! Those into history should check out the Royal Alberta Museum (12845 102 Avenue;) – one of Canada’s finest cultural and natural history collections – and take a free tour of the imposing and fascinating Alberta Legislature Building (10800 97 Avenue;) a.k.a. “The Ledge” – Alberta’s decision-making heart.

Undoubtedly Edmonton’s most bohemian district, just south of the river, Old Strathcona was recently voted one of the Top 10 Coolest Neighbourhoods in Canada – with dozens of drink, food, dance and music options, mainly hubbed around Whyte (82nd) Ave – and is also designated a Provincial Historic Area on account of its several blocks of landmark properties dating from the… early 20th Century! Laid back family fun by day; tad more raucous, and straight macho, by night! It also boasts several theatre groups – including the brilliant Catalyst Theatre company – plus a high concentration of independent boutiques and other businesses. Open Saturdays, year-round, 8am – 3pm, Old Strathcona Farmers’ Market (10310 83 Avenue;) provides “a touch of the farm in the heart of the city” – for all manner of locally produced food and crafts!

For another arty area, check out “The Gallery Walk” (124 Street between Jasper Avenue and 104 Avenue), just west of Downtown – a clutch of galleries, restaurants, gift and fashion shops, bookstores, theatres and such.

To get out and about, don a helmet and take a quick lesson and guided river valley tour (1hr or 1½ hr) on a segway gliding through North America’s largest urban parkland that cuts a swathe through Edmonton. Fab café and patio too! Whilst down that way, pop into the distinctive pyramid-topped Muttart Conservatory (9626 96A Street;) to explore a steaming jungle, trek across a sun-baked desert, enjoy the changing seasons in a temperate forest and breath in the scents of a flowery meadow!

Edmonton’s gay scene is a tight-nestling trio just West of central Downtown. Start at Woody’s (11723 Jasper Ave), the large upstairs bar with video, pool table and balcony seating. Then descend to Buddies (11725B Jasper Ave), the sizable basement dance club next door, to jive to remixed chart and dance hits or just kick back and people-watch from a booth. Still restless? Then skip to Steamworks (11745 Jasper Ave), the gay sauna round the back of Woody’s and Buddies – housed over two levels, with steam room, private cabins and a whole lot more! For a stark town-country contrast, take the mere 4-5 hours trek, due west of Edmonton, to Jasper – in the awesome eponymous Jasper National Park.

Minus a car, there are two main options for transferring between Edmonton & Jasper. For comfort and glamour, VIA Rail does the route both ways as part of its mammoth 5-day Toronto-Vancouver haul. For sheer speed, take the daily SunDog Shuttle Bus.

However you travel, as you leave scraper-centred Edmonton, the horizon unfolds and then soon lifts you thousands of metres up, into the wildlife, peaks and lakes of the soaring 3000m-plus Rockies! The railroad first opened Jasper up to tourism in the early 20th Century, and its lofty lure pervades all-year-round – whether for snowy piste in winter or leafy walk come summer.

Jasper itself is a tiny town in a big park – the perfect gateway and hub from which to adventure within the largest and most northerly Canadian Rocky Mountain National Park, a UNESCO World Heritage Site.

Slap bang in the heart of Jasper, Whistlers Inn (105 Miette Avenue;) exudes a cosy Canadian Rockies alpine air, offering 63 spacious rooms, many with jaw-dropping views of the surrounding mountains. Soak in its outdoor, rooftop hot tubs after a hard day outdoors; or eat and drink in the local flavour of the adjoining Whistle Stop Pub – trying its onion soup, plus chilli lime chicken, all washed down with a tasty Kokanee beer!

The first brewery opened in a National Park, Jasper Brewing Co. is the “go to” place to chill out and unwind. Fresh, modern, and innovative brews accompany a great menu too – try the calamari, plus lobster and cheese sandwich, all knocked back with their fab Rockhopper beer!

Anything this good must be Evil! Evil Dave’s Grill (622 Patricia Street;) is a “funky, upbeat restaurant” where you can satisfy your hunger with “Holy Cow” tender beef strips starter, “El Diablo” chicken-with-rice main, and “Bread Head” banana cake finish! Wicked!

Explore wee Jasper itself: its little museum, and well-signed wilderness woods walk out from Old Fort Point to Lac Beauvert near the luxury Jasper Lodge golf course – watch out for bears en route in season! SunDog Tours offers a range of year-round excursions. Try its interpretive tour up the remote Maligne Valley, including a stop at Maligne Canyon for a walk above the deep gorge; then at Medicine Lake; and then at Maligne Lake where you can enjoy a hike along the Mary Schaffer Loop (3.2km return). The trip is also an excellent opportunity to spy Jasper’s wildlife including – depending on season and luck – the odd fox, coyote or wolf; sheep, goat or squirrel; deer, caribou, elk or iconic moose; eagle or osprey; bear, black or grizzly; or even – if miraculously blessed – cougar.

Magic mountain moments! Take the hourly SunDog Tramway Shuttle bus from central Jasper (pick-up at 611 Patricia Street – ticket includes tramway itself) to the Jasper Tramway station, pre being gently lifted to 2500m in 7 minutes, into Jasper National Park’s alpine tundra, via the longest and highest guided aerial tramway in Canada. The Tramway delivers unprecedented views of six mountain ranges, glacial fed lakes, the Athabasca River – Alberta’s longest – and the town-site of Jasper itself. The Upper Terminal features a gift shop and licensed restaurant. At the top, you can also hike, at least in summer, on prepared trails to the nearest summit, for spectacular 360-degree views, and memories that will last for ever!

There are a whole range of other summer activities in and around Jasper, from horse riding to river rafting. And, of course, winter brings downhill and cross-country skiing, snowboarding, snowshoeing and the like! Air Canada offers more services between the UK and Canada than any other airline, with up to 84 non-stop flights per week to eight major Canadian cities scheduled this summer. The airline operates up to five services per day to Toronto; plus daily services to Edmonton, Calgary, Montreal, Ottawa, Vancouver, Halifax and St. John’s; as well as offering a range of connections from its Toronto hub to destinations across North America, Latin America and the Caribbean. For info or reservations call 0871 220 1111.
•    Scottish readers note: Air Canada’s fast-expanding great-value new leisure carrier, Air Canada rouge, also starts flying between Edinburgh and Toronto this July (2013), with frequent direct onward flights from there to Edmonton via Air Canada’s domestic network.

One thought on “Travel – Alberta: Edmonton & the Canadian Rockies”