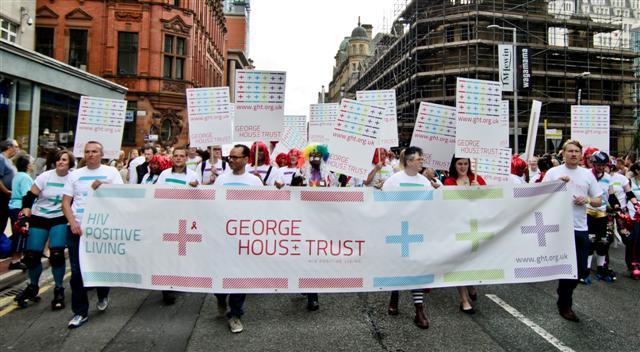 A University of Salford study with charity the George House Trust has highlighted the North West’s growing population of older people with HIV and the lack of services for older HIV-positive gay men.

The development of antiretroviral medications has meant that people with HIV are living longer lives and many can expect to live well into older age. The age profile of HIV-positive people means that the over-50s is the fastest growing group in the UK, and a sharp rise can be expected by the end of this decade as more people reach this age.

In the North West there were around 1,000 HIV-positive people over the age of 50 in 2009, but this will double to nearly 2,000 by 2014 and more than triple to over 3,100 by 2019. The numbers are highest in Greater Manchester – and the city of Manchester in particular – where the study suggests attention should first be focused.

In light of the lack of research and services in this area, the University of Salford has collaborated with the George House Trust in Manchester to explore the needs of older gay men living with HIV. The Trust provides support to people living with or affected by HIV and is the largest HIV charity outside London.

Focus groups held with gay HIV-positive men who use the charity raised concerns about the NHS and its ability to care for them in the future, especially within the context of cuts to public services. It was important for them to remain independent for as long as possible and all of them wanted to be settled within a property. However, some feared the practicalities of being able to meet the financial obligations of a mortgage.

The study revealed a strong concern that long-term illnesses like HIV can affect a person’s mental wellbeing, and that support may be needed at some point in the men’s lives to deal with potential mental health issues caused by stigma and discrimination. The men expressed their wish to live a life free from stigma, to be accepted for who they are and to remain socially and sexually active.

They hoped for further medical improvements and for the side effects of their drugs to be reduced. Other worries included the long-term effects of medication and whether cuts to NHS resources would affect the cost of drugs.

Steve Myers of the School of Nursing, Midwifery & Social Work said: “There is a need to develop services which will assist older gay men living with HIV. This group is growing and we need to look at how we will meet their housing needs, provide community support and ensure that counselling services are available.”

Rosie Robinson, Chief Executive of George House Trust, said: “We are delighted to have worked in collaboration with the University of Salford on this important study of what gay men living with HIV feel that they will need as they age.

“Better and more effective treatments mean that people are living longer, healthier lives with HIV. If we are to remain responsive to the needs of people living with HIV, it is important that we consult with them about the kind of services they would like to see developed to adequately meet the needs of an ageing population.