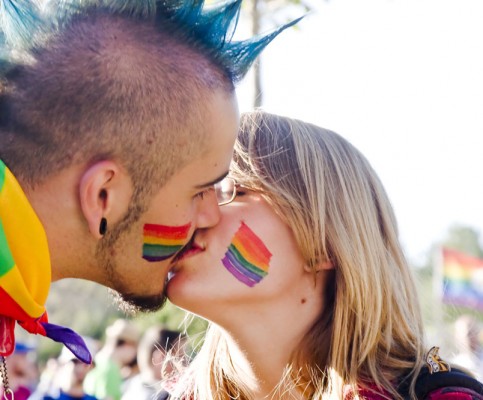 Each year, since 2004,  17th May marks the International Day against Homophobia and Transphobia (“IDAHO”) around the world.

In over 100 countries on all continents, activists and their allies are mobilizing.
1.5 billion people still live under regimes that deny the simple right to love. 45 million people, the size of the population of Spain, are considered criminals under these laws.
This year, the Secretary General of the United Nations, Ban Ki-moon will join the mobilizations for the International Day against Homophobia and Transphobia with a statement for the International IDAHO Conference taking place in The Hague, in presence of HM the Queen of the Netherlands.
Full list of events and suggestions for taking last minute action at dayagainsthomophobia.org

The mobilization for the International Day Against Homophobia and Transphobia this year confirms that May 17 has become an annual landmark for the defense of Human Rights, as LGBT activists and their allies mark this date around the globe.
This mobilization includes:

*17 African nations. In 14 of these countries homosexuality is legally punishable, with maximum prison sentences ranging from 3 months to 14 years.
*Several Middle-Eastern countries, including Egypt, Lebanon, Israel and Palestine.
17 of 21 countries in South and Central America.
*Several countries where there are more than 50 events planned around the day, including the UK, the US and Brazil.

Says Joel Bedos, Executive Director of the IDAHO Committee, “The mobilization shows just how universal the fight for freedom and basic Human Rights is. Today, there are still 78 countries in which same-sex relationships are illegal.
Although the world has made progress in relative terms, the actual number of people concerned by these laws is almost the same as in 1950, and today there are still 1.5 billion people who live under direct risk of criminal sanctions for same-sex relations. If we agree with the consensual figure of 3% of any population having a predominant emotional and sexual attraction to someone of the same sex, then we are talking about 45 million people whose love is illegal. That’s the population of Spain!

And even if the decriminalization of homosexuality was to continue at the same pace it did since the 50’s, it still would be totally completed globally only in … 2040 !”

Around the world, hundreds of activists have unleashed their imagination to press their governments for change. In total, actions which connect with the “IDAHO Global Rainbow Flashmob” have been confirmed in 49 different countries. As part of this, multi-colour dance flashmobs will happen through the streets of Nairobi and Bangkok, a “rainbow bubble” action is scheduled for Japan, and street parades are happening in Jakarta, Havanna and Managua !

And hundreds of other events are reported.

A special video “The Riddle” was released recently by the United Nations’ Commissioner for Human Rights to mark the Day. Still from the UN, Secretary General Ban Ki-moon will deliver an address during a major European wide conference organised by the Government of the Netherlands, in presence of HM the Queen.

Meanwhile Pop icon Mika will headline the giant concert for IDAHO in Paris, on 21st May.
On the other side of the Atlantic, Washington D.C’s National Cathedral will be hosting an event which will bring key faith leaders together.

Says a Kenyan community activist, “The International Day against Homophobia and Transphobia creates an opportunity for all to celebrate the courage of the thousands of people who pursue the thought of Margaret Mead: Never doubt that a small group of committed and thoughtful citizens can change the world!
And day after day, they do!”