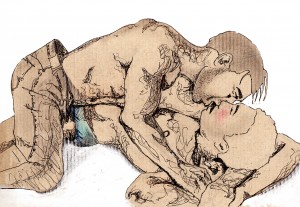 The music swelled to a fantastic crescendo and the diva’s voice took on even more drama. The words sounded like they were echoing around a cathedral and the rhythmic, pulsating disco beat drove the song along at a superb pace.

Paul was enjoying the feeling. Harry’s hands were gently smoothing their way over Paul’s rampant cock trapped inside his silk briefs. Minutes before the young visitor had been worried that his blue silk underwear would put the mockers on the evening’s mood… but Harry had been delighted to see them. They clung straining to his slim hips as Harry gently cajoled and manipulated the lad’s throbbing cock. In the soft light the curves and tightness of the material sent Harry into wave after wave of pleasure… his sense of touch seemed heightened and certainly he loved to watch the way Paul’s young body reacted to each gentle caress.

Since being picked up in the pub 22 year old Paul had let the older Harry take command of the situation. He’d liked the look of this enthusiastic, witty man who had made him an offer he couldn’t refuse as he sat at the bar feeling sorry for himself. Harry’s insistence that he knew something that would bring a smile to the young man’s face had sparked his interest. He desperately needed something to cheer him up and this hunk of a guy in his work’s overalls was just the distraction he felt he needed.

For almost an hour Harry kissed, cuddled, licked and nibbled at Paul’s pale but nicely proportioned body. It was nice… nice and soft with hardly a muscle anywhere… Harry thought it was like touching a warm soft kitten. Paul gave himself completely to this much more knowledgeable, sexy and attentive older guy. The music relaxed him and comforted him and each song seemed to offer a new form of stimulation from Harry. Harry enjoyed the experience of such slow and obviously appreciated lovemaking but the ache in his groin was getting too much. He knew, from the way his fingers could slip easily into his visitor’s butthole without it being clamped shut that Paul was now at total ease with what was being done to him. He also knew that the next track on the CD was not only one of his favourites but was building up to Harry’s sexual climax. He eased down the front of his briefs and his raging dick stuck up pointing to his belly. For the moment he decided to just rest it in the cleft of Paul’s soft and inviting bum cheeks. He slowly rubbed it up and down the smooth crack but could feel the blood racing and pulsating along its thick, nine inch length making it vibrate and painfully hard. Harry had decided that once the next track had got to the chorus he was going to sink his cock into the lad… he desperately needed to get some relief and, whether the lad was ready or not, he was going to provide it.

Paul heard the growling vocals of Divine and was surprised that such a song had found its way amongst all the other more atmospheric club tracks he’d heard so far. The song picked up and the chorus pumped in “You think you’re a man but you’re only a boy. You think you’re a man but you’re only a toy.” At that moment he felt Harry’s cock push its way into his hole. He’d been expecting it but also half of him had decided that not everyone was into shagging. He wasn’t, he’d never done such a thing in his life but, the way Harry had been so far he trusted him not to hurt him. Harry’s stiff cock ploughed in and past Paul’s widening butt muscle. Paul, who had a split second spasm of worry, relaxed as soon as the hefty piece of Harry dick pinned him to the carpet and all the strange new sensations flooding his body began to work his brain to a state of utter exhilaration. He came immediately all over the shag pile but to his surprise found he loved the feel of such a nice piece of Harry so totally filling him. Paul couldn’t believe it. He wondered briefly why he’d never done this before… it was fantastic. He felt euphoric. God how he loved the feel of a dick up his bum… Jesus he could ride on this for hours. Harry was so pleased to have a hole to fill for the evening and hell… was the lad going to get the full works tonight.

Totally ecstatic, Paul hardly registered the words that meant so much to Harry “…but you’re woman enough to satisfy me”.