I remember the first time I ever sunbathed nude. It was when I was 26 years-old and visiting an American friend in New York and we went up to the Hamptons. I wasn’t sure if it was an official nude beach but there were as many people with swimming costumes on as there were without. I was nervous but loved the freedom of being naked on the beach but come the time to go home I found that the sun had done its worst, and I had stupidly not lotioned my bum (or my cock and bollocks) enough and I was very red and very stingy. For a couple of days I could hardly stand the idea of wearing anything next to my skin as even a pair of cotton shorts proved to be uncomfortable. I learned…

A few years later, when I visited the sand dunes in Masapalomas, I had no such trouble. My body was slaked with creams, oils and unguents (which is just as well on those particular dunes) and my body withstood the beating sun.

As I’ve got older I haven’t felt the need to strip off to worship the sun, and in many ways I’ve developed a delight in seeing a deep tan line… but that is just another one of my many fetishes… which I can appreciate as much as an all over tan. Despite it being very popular with certain people I’ve never quite taken to the idea of a spray tan, or even stood in front of a tanning lamp, if I’m going to have a tan I want to get it ‘au natural’. 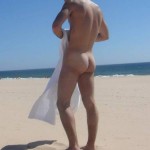