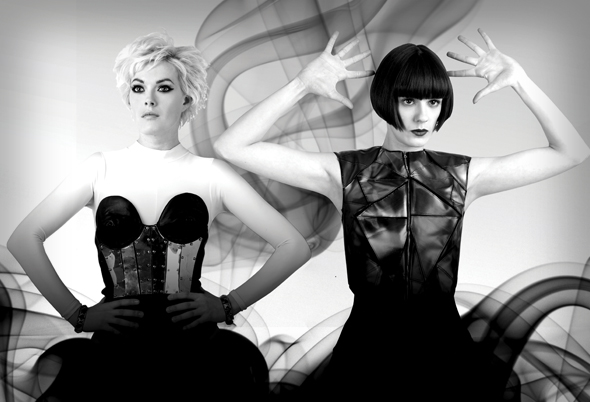 The Pipettes last graced our airwaves with the wonderful ‘Pull Shapes’ (which makes you want to dance your pants right off) back in 2006. Now years later the girls are back… though they look slightly different. Simon Savidge went to meet sisters Gwenno and Ani and investigate.

What is it with girl bands and falling out?
G: Ha (giggles) you are already trying to catch us out… we didn’t fall out honestly. Mind you actually if you look at the number of line up changes we have gone through since the time that Pipettes began we make the Sugababes look stable. (Laughs)

Would either of you have wanted to become the Sugababe?
Both: NO!
A: We are The Pipettes, I would much rather be in this group. Well the money as a Sugababe might be nice I guess. I am sure the girls are lovely, I have never met them, but I have only just become a Pipette.
G: Having been put into a girl group replacing a member already I don’t think I could do it again. It’s hard joining a manufactured band without the other members having already bonding together pre-you. Jade’s stunning though isn’t she. I think they will make it work… maybe.

So just what the heck happened in Pipette Camp it’s all change?
G: Well in some ways it really has and then in other ways it really hasn’t. I guess because the boys in the group didn’t do the PR or video’s etc as much… everyone is seeing that the line up in terms of a group has changed… and yes it has. Basically after the end of the last album’s campaign Rose and Rebecca decided that they wanted to go and do something else. We didn’t exactly fall out I just think we all wanted different things creatively. But now we have a lovely new member…
A: That would be me I take it? (Laughs)
G: Funnily enough it would!

So you weren’t pulling each other’s hair out and having catfights, which make for fabulous pop music drama?
G: No (laughs) though that would have been fabulous. Maybe not at the time but could have been one of those things you looked back on in later years and thought ‘wow, we fought in polka dots…’
A: The polka dots have gone too! Shocking isn’t it?

Did you ever think of changing the name of the group?
A: We talked about it on and off and came up with some shockers but we knew we wanted to carry on singing the old songs and that wouldn’t have worked. We would have become like a Pipettes cover band. I already find it weird enough I get to sing the songs I used to watch the girls singing as I was actually a huge Pipettes fan, and not just because my sister was in them.

You have gone for a rather different sound on the new album, what made you move to disco?
G: Like I mentioned before we had already sort of decided that we wanted to do something that had a disco feel and also had a certain ‘outer-spaceness’ about it.
A: Think Barbarella.
G: Exactly, a lot of people have said we planned it as the 80’s have come back but we started writing this album two and a half years ago. Actually it’s a bugger this because this happened with album one. Who was singing sixties girl band sounds for the noughties first, the Pipettes or Winehouse? (Laughs) I will say no more.

So tell us more about the new album? It’s something that the gays can boogie too isn’t it?
Both: DEFINITLEY
G: We are both so excited about this album. It’s a party album that evokes disco of the past and then makes it more current. There’s no real ballads. Well you think a song is a ballad and then the disco ball appear suddenly.
A: It’s one hundred per cent an album to listen to before you go out or dance around your hand bag when you get in.

How did you get Martin Rushent to come out of hiding (a legendary producer of The Human League’s ‘Dare’) and work on this album?
A: If we say we were trying to work with anyone and then Martin came along that sounds wrong doesn’t it? Almost desperate (laughs).
G: Thank god he did though. He was great. He was instantly keen and saw there was potential and so that was it. Without him this album wouldn’t be anywhere near as good or as near to how we envisaged it in our pop heads.
A: Don’t say that! Martin already thinks he’s great. (Laughs) If you work with Martin you have to understand that Martin is God, end of!

Is it nice working with your sister or can those closest to you wind you up the most? Which pop duo would you like to be most like?
A: We know when to stop winding each other up, which I think is really important. We also don’t sulk with each other. We might not speak for a bit but no sulking. You laugh more than anything and just egg the other on.
G: As for duo’s… Hmmm…
Both: Bananarama!!!!!
G: And look at them they are still going, getting people on the dance floors and looking amazing. Yeah that’s what we want.

The album ‘Earth vs The Pipettes’ is out now.