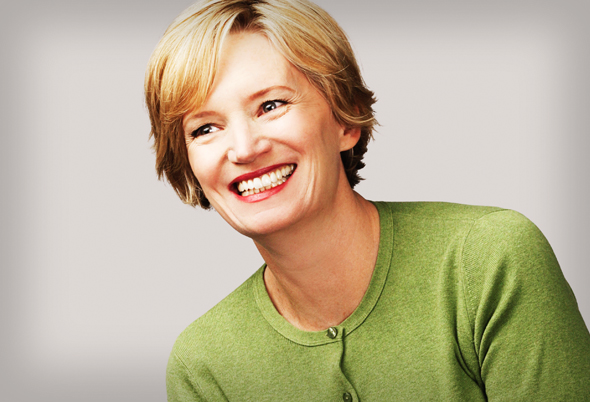 You will of course know Jane Turner from the legendary and wonderful Aussie comedy ‘Kath and Kim’ but we sent Simon Savidge to watch her performing in her UK debut role in the West End playing a host of characters in the comedy/ drama ‘Holding the Man’. Later he caught up with the star to chat about the new play, gays and just what’s happened to Kath and Kim?

There are a few people that I get nervous about and arriving at a very swish central London hotel (these places unnerve me at the best of times) and then finding there are pseudonyms and all sorts to go through before I meet Jane I start to fret a little. It’s all because I am a ridiculously big Kath and Kim fan and sometimes you worry that the people behind the ‘uuuumour’ might not be so nice. With Jane I needn’t have worried. She soon comes down and leads me to the ‘lounge’ where we order some rather snazzy coffees. She’s warm friendly and makes you laugh within a few minutes.

We aren’t here to talk about Kath and Kim today, though I am determined to at some point during our natter, but rather the wonderful play ‘Holding The Man’ that Jane is starring in on the West End at the moment. It’s a play that has some personal history attached to it for her. “I knew both Tim and John who this play is based on and the people who it touched. It’s a very important story to tell and one that I think never loses its importance. Mind you,” she chuckles, “if it had been a crappy play I wouldn’t have gone into it at all. I think knowing them as I did, and even playing a few of the people I knew, adds something to it for me and hopefully the audience.”

Holding The Man is a hard hitting play though and isn’t just comedy in fact one of the hardest things for me way that Tim, who might or might not, though is rather likely to have given his long term partner and love of his life HIV has no remorse. “I think that’s one thing a lot of people have found hard to be honest. But the fact Tim wrote the book, on which the play is based, so openly, warts and all, means it has that impact. He always said he wanted to live the life of a Fast Queen and he did. He was devastated when John passed away and that really was when the remorse hit him and the play seems, to me, to be a confession and one that doesn’t hold back. You have the light and the dark. That was part of what attracted me to the show… the diversity of the roles. I am playing 13 different characters, oh fourteen actually if you count the demanding role of puppeteer” another giggle “some of its hilarious and some of its very emotional for an actor it’s a dream because you get to do a bit of everything and I was slightly worried about being typecast as varying forms of Kath for eternity.”

The play is very, very gay… “I know, I let my fourteen year old daughter come and see it, she really wanted to, and afterwards I said ‘I am so sorry darling’ as it is quite graphic. She wasn’t bothered, which shows hope for future generations” laughs “though she has watched the Saw series of films so a little bit of full on gay sex discussion isn’t going to bother her is it? The audience is gay, gay, gay which I love though I wouldn’t mind a few straight admirers popping by.”

Kath and Kim was embraced by the gay market and I wonder if Jane did the show in honour of her gay following, she is after all a bit of a gay icon in the UK “Am I really? I don’t tend to think Kath and Kim was that big here. It’s nice to know gays love it as they are a great audience; they get the whole camp sensibility of it. I didn’t really do this show for that reason though, I did it because I thought the story was important and the show was great. The fact it has a big gay message and the audience –which is mainly gay – seems to love it is a double bonus. I have always had gay friends and love them all dearly, though you can all get a bit much on occasion” laughs “I love playing gay parts in fact me and Gina always loved playing Drag Queens when we did Fast Forward. I love the gay parts in this show being a Spanish lover, and getting my bum out, and being an old queeny professor and dancing like a crazy person. I have taught myself a new dance for that part especially I am calling it the Horse Hoof, I might use it on Dancing With the Stars one day… it’s quite unusual.”

At the last word we look at each other. “You’re going to say it aren’t you?” she laughs and I can’t help it, those three words splutter out of my mouth… Nice, different, unusual. “Those words will haunt me forever, you might see them on my epitaph.” I suggest maybe the one word ‘Tizzy’ at which she laughs “I haven’t used that one in ages!” She adopts the accent “That’s tizzy, tizzy… ooh hang on I just became Pru.”

I decide it’s now or never… let’s talk’ Kath and Kim’, is it coming back? “Well I am going to be honest and sadly say it’s very unlikely. It’s not that we don’t enjoy it, we both do and actually Gina and I are itching to get back working together, we just think it’s worked its course and you should end on a high. We might do a farewell something.” Could that involve a musical? “Ha, you never know, Gina has a great voice and I can pull some moves. I think maybe we could do a few spin offs with some of the lesser Kath and Kim characters and maybe some sketch shows again like Big Girls Blouse. Who knows, it’s a scary and exciting rollercoaster, a bit like this play!”