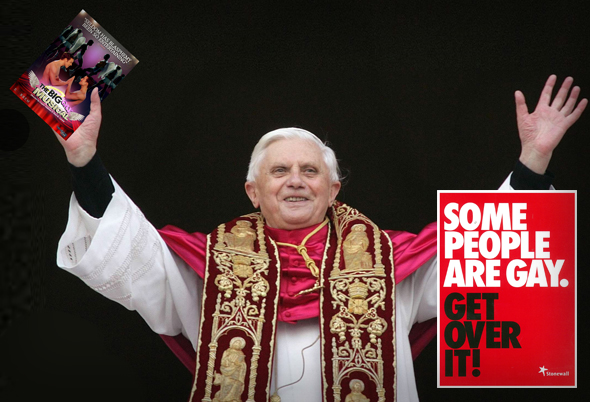 I was watching a DVD the other day and I was pleasantly surprised… it finished and I was in a great mood. Often the problem with gay DVDs in particular is that they leave me quite depressed. Someone is hurt, someone dies, someone is an arsehole or the storyline is just too contrived to be anything but annoying but not this one… at the end I looked at my partner and we both had huge smiles on our faces. The Big Gay Musical was the cause of this feel good factor. It’s all about an Off-Broadway musical comedy production of “Adam and Steve – Just the way God made ‘em” full of singing and dancing and hunky boys with wings and nice shorts. Well, it was more than that. The lyrics to the songs were exceptionally well written and I kept thinking, perhaps, when the Pope comes to visit the UK, instead of throwing a huge pot of piss at him for his anti-gay comments I’ll just throw a copy of the DVD and hope that he watches it. It really is galling to think that there is often more truth in something as easily disposable as a musical comedy… than in an entire religious ethos.

I have to admit I was quite pissed off that the Pope was coming to the UK but, and I’ve given this absolutely no thought at all, it is one of the penalties of living in a country that values free speech. I get angry at a world dominated by various religions that do not value everyone, who need to look down on someone else and whose logic for doing so is totally illogical. I hate governments hell-bent on suppression rather than support and where even worse, they have a menial working class… and intend to keep it that way.

We are very lucky here in the UK that we don’t have a lot of what other countries have no option but to endure. In Malawi, two young men have been sent to trial for the crime of loving each other… a sicker sign of a corrupt and controlling government would be hard to find. We take many things for granted, and I’m sure we are positive that it couldn’t happen here but we must never get complacent because as sure as the Pope’s a Catholic, there are people who do want to take away all the freedoms you have or hope to get.

Meanwhile, the ‘Some People Are Gay! Get Over It’ campaign launched nearly three years ago to help tackle homophobic bullying seems to be gaining a bit more momentum. More schools, colleges and universities appear to be getting the message by signing up to receive… and display… posters and leaflets for this campaign with this simple but not earth shattering by-line. Contact Stonewall if you want more info or need posters to display yourself.