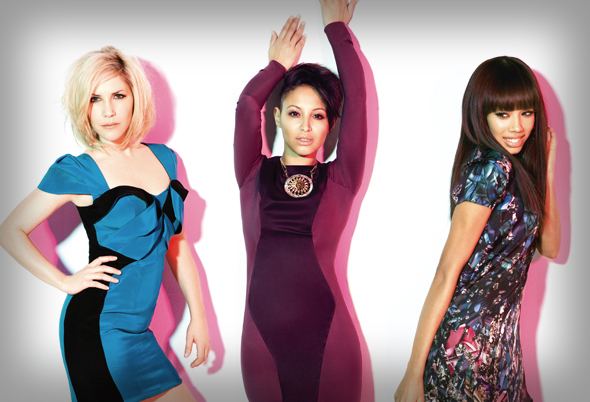 They have been one of the biggest selling girl bands in UK chart history; they have also become famous for changing members more than a gay man changes boyfriends. So what has really been going on in the world of the Sugababes? Simon Savidge went to meet the girls face-to-face and find out just what the hell has been going on… and of course… what the future holds.

Last year the saga of the Sugababes had us all fascinated as to who was coming, who was going, who was staying, who was annoyed with who and who was saying what behind whose back. Amelle and Keisha – Keisha and Amelle and then, out of the blue, Keisha departed leaving us wondering what happened. Meanwhile, the gossip columns ran riot about the ‘split’. However for the three individuals in front of me it wasn’t fascinating, more soul destroying. “It was the hardest time and incredibly emotional for all of us… and I mean all four people involved.” Amelle says: “Friendships and your sanity are on the line let alone your career”. album, single, Sweet 7,

I am unsure what to expect of the Sugababes, in fact I was quite nervous. I was expecting them to be on edge, a bit distant and possibly, if I am honest, a bunch of bitches – even though I am a complete fan and have been for years.  However, when I met them Amelle is instantly incredibly warm running up to give me a kiss. Jade I have interviewed before for Bent and is prone to delightful giggles. While Heidi is warm and friendly but slightly holds back, she does have ‘a massive hangover’, left over from her recent engagement party. I tell her the gay population wouldn’t mind a Dave Berry (Channel 4 presenter) each, she laughs and says she can easily see why. Amelle agrees; ‘He’s a right fittie isn’t he?’

I wonder if maybe Heidi is more wary of the press, and therefore me, after the last few months as she has been cited the instigator. I ask her how it’s felt to hear people say she was instrumental in the split. “It hurts to be honest; you wouldn’t be human for it not to. People saying I was plotting to get Keisha out is cruel and just not true… though I personally think Amelle has had it the hardest.” You can see there is a very protective streak running through the soon-to-be Mrs. Berry. After her comment a look passes between the two and you can sense the girls have had a really tough time. “It was hard for about a year.” Amelle says; “We really tried you know. We hoped things would get better but we were dreading every day of work and in the end I’d had enough. I didn’t get kidnapped or anything like that but yeah, I turned my phone off, it was too much. Wouldn’t you do that?’ She has a point. Heidi adds that in the end there was no band as both she and Amelle quit. Then the label contacted us and asked if we would be interested in carrying on with a new member.

I wondered if they had planned to do anything as a duo and both girls agreed that it hadn’t really crossed their minds… and besides the Sugababes have always been a trio. On that topic many people say the Sugababes are now non-existent and it’s just a brand name. “That really, really annoys me.” Heidi says (you can tell she wanted to say she was pissed off but is too polite). “When the girls got dropped and then resigned with me we signed as the Sugababes. That was when we then had the first number one and Amelle was a member when we had our biggest selling album, so it’s just not on. Sorry, it just makes me quite cross.”

So, was this when Jade was brought in and had she been on standby? Not initially it would appear as Jade tells me. “We didn’t plan it despite what people have said. Actually, until I had met the girls I didn’t want to say Yes or No to being a Sugababe.” I wonder if Jade was at all wary or nervous at the prospect. “Not really. I wanted to meet them see what they were like and go from there.” Amelle looks across to Heidi and says; “I think we were more nervous that day weren’t we? We sort of both walked to Jade’s room and then were hiding behind each other backs and didn’t know what to do once we knocked on the door.”

So, I ask, how did that initial meeting go? Amelle can remember Jade’s exact outfit, which Jade herself can’t remember. They all remember pancakes but weren’t sure how they started chatting but get very animated and excited as they look back. You can tell they genuinely like each other and are having fun. “I was a fan of the group, and still find it really weird that I am in it.” Jade confides. “I find it hard to sing Keisha’s parts as to me they are still her lyrics.” However, Jade does have one impressive memory of that meeting. “I remember Heidi had big shades on and I was thinking – Wow she’s a proper celebrity.” They all laugh but Jade adds that although the girls are all supportive of one and other, the public is a different matter. “I have had some really horrible letters and mail… Keisha fans shouting at me in the street and that’s been hard.” Amelle puts her hand on Jade’s leg and looks at me. “I had that. People who were like ‘oh you don’t sing as well as that Mutya, you’re rubbish’ and all you wanna do is sing… so it hurts.”

I tell them it’s time to talk ‘now and the future’ – after all everything else was so last decade! The girls all laugh but Amelle adds; “Though we aren’t together… we do genuinely wish Keisha all the best for the good times we had… honest”. So we move on to the new single, Wear My Kiss, which Jade says she feels is more her and they all want to know if I like it. I come up with a phrase I’m not proud of but was what was my first impression .“It’s quite a jiggy-jiggy song isn’t it?” When I say the new sound is more ‘The Sugaminxes’ Amelle giggles. “Actually, there is the line about the lips and in the routine we are supposed to put two fingers to our lips. Occasionally, me and Jade point them somewhere else.” They all starts shrieking with laughter as Amelle then starts doing some very rude signals, which makes us all laugh even more though Heidi says: “I can’t do it… I wonder if I am a bit of a prude you know?” Amelle looks at Jade. “We have to get her to do it, it would be brilliant.”

They are all very excited and also very, very nervous about the album, admitting to “butterflies all the time”. “It’s music I would listen to,” Amelle says, “it’s a good party album though there are some lovely ballads too.” I tell them I am sure the gay fans will be ‘on side’ plus, we are a fickle bunch and a new member just gives us a chance to have a new favourite. “Gay fans are really, really loyal so we just hope we all have enough gay fans each to keep them. We all love our gay fans.”

At the moment there are no plans to tour in the UK but maybe, with the next album?

It’s soon time for the girls to head off. I say good bye to Heidi and Jade, while Amelle comes bounding over for another hug and, she wants to know if I liked them. I say I did. “Good.” She says, “I like it when at the end of an interview people say ‘you’re really nice’ though its sad people think I am a bitch… but then I think everyone thinks we are all bitches and we aren’t at all.”

Taken from the new album “Sweet 7” available 8th March – Sugababes new single “Wear My Kiss” is out now. For more info on the Sugababes visit www.sugababes.com