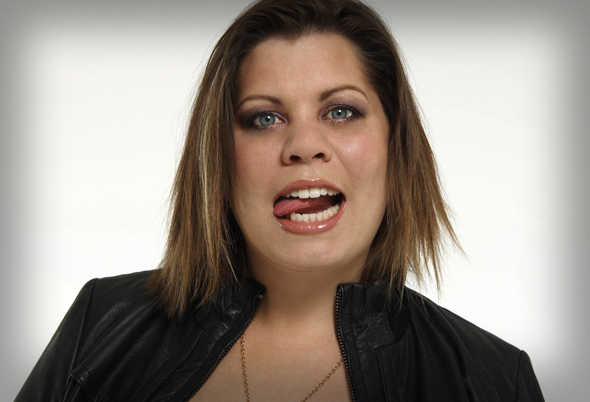 Katy Brand has been making us laugh with her witty characters, hilarious spoof music videos and celebrity sketches on TV for a while now so, at the start of her first national tour we sent Simon Savidge to meet her to discuss, being Beyonce, making people laugh and why her Big Ass TV Show had to stop.

When I first meet Katy my initial impression is of someone who is currently on a high (we meet after she qualifies for the finals from Lets Dance for Sports Relief) and there is a delightful crazy buzz in the air. “I am still slightly reeling from the Beyonce thing… I really wanted to do the dance and I had forgotten what the costume implications would be.” I wonder if it’s harder doing it live than making video’s for her TV show. “It’s worrying as you have only one chance live, you only have two minutes, and in terms of audience this was the biggest thing I had ever done. In digital terms 600,000 viewers is deemed really good so, seven million plus… is quite daunting. You don’t know how you will react yourself… I was thinking that I might just sit on the floor and start crying (laughs) it’s not out of the question.”

As her three month nationwide tour kicks off I ask her what goes through her head when she’s on stage. “Whenever I am performing live my brain always splits into many different parts; one bit is monitoring the reaction of the audience, one bit is constantly saying ‘you’re a dick, you’re a dick’ (laughs) and another bit’s thinking ‘no this is good this is alright’. Meanwhile, another bit is remembering the steps while another tells you that you just did everything wrong. I am assuming everyone else gets this and (laughs) that I am not just mentally ill.”

A live show is no easy feat though and as we discuss it further you can tell that Katy is a women who is both incredibly excited… and quite nervous, there is after all the logistics of doing the show live. “I am currently hoping to transform from Lady Gaga to the Queen in less than twenty seconds, not many people can say that can they? I am gonna give it a good go. I am looking forward to making jokes I know could never have got on TV without lots of lawyers.”

Despite all the success that Katy Brand’s Big Ass Show had I am surprised that she decided it was time to put it to bed and, despite it being good to end on a high, she does seem genuinely saddened about it. “I knew after the third series I didn’t want to do another show, yet there is still some fun stuff that I wanted to do with the characters… interestingly not the celebrity ones. I don’t always want to tick a box and do the obvious thing. It is quite sad though, it was becoming all about the celebrities. All the press I did was about ‘who was next’ and ‘why did I dislike so many people’. I don’t dislike most of the people I have done, for the most part they are all quite charming.”

However, the show ending doesn’t mean this is the last that we have seen of the characters though some of the celebrity spoofs might be put to bed “My heart’s with the other characters really.” Before she stops doing celebs  I ask her if she could do one about Lily Allen actually being in a retirement home fighting with the older inhabitants, which is greeted with hysterics. “If you see that on the telly… I will pretend we never met, just so you know that now.”

You can tell that Katy has had enough of being asked about the celebs she has spoofed and who is next. “It’s not so much irritating exactly…. just I got bored answering it all the same old questions. So, I would answer with something flippant and silly and that would be the quote that would get in the press. I would like to officially say I have never hidden from Lily Allen in a toilet… I was joking, and the journalist knew it.”

I change the subject and decide to look at the past, I wonder when Katy first knew that she was funny… was there a defining moment perhaps? “I don’t know. I never had a realisation moment. I had funny friends at school and we were always giggling. I was often sent out of the classroom. I liked sending things up and not taking things too seriously. (Laughs) If anything I was just an annoyance. I called it being creative, just not in the way my teachers wanted. I still surprise myself that I can make people laugh.”

It wasn’t an instant career or an easy one for Katy to get into “there wasn’t much in terms of drama at school. In fact it wasn’t until university that I found people were doing this seriously. I joined the comedy society not really knowing what it was; in fact it was a stage in my first term where I just joined anything and everything. I joined the rowing team, the football team, rugby, I joined the Pacific Rim society…” Katy pauses as I splutter in hysterics and I get a raised camp eyebrow naughty look. “Yes the Pacific Rim society (laughs) be careful how you represent that one (laughs) erm… yeah (giggles) it’s not as interesting as it sounds it was mostly about how you cook bean sprouts and nothing more (laughs). I then tried Review… as I forgot the punch line of the joke, they all thought I was being satirical and I got in.  Then I wrote a sketch, did Edinburgh by  selling everything, lost lots of money and then it all sort of went from there. I had nothing to loose. I just thought ‘so what if I’m crap’ and went for it and hopefully it has turned out I wasn’t.”

People do say that all comedians make people laugh in order to cover up some deep despair that is haunting their inner soul. Katy is quite sure she missed out on that comedian gene. “It’s the tears of the clown thing, which really doesn’t apply to me. I think some comedians might be unhappy, but that could just be the energy you use in the show and you want to be on your own for a bit. I honestly constantly find everything hilarious in life and that’s just me.”

Time whizzes by with the laughter and jokes and all too soon its time to wrap up, I want to know what the future holds. It could just possibly involve the big screen. “I wouldn’t mind winning an Oscar (laughs) I actually bet someone at school, during a very boring science lesson, £50 that I would win an Oscar by the time that I am 40, so I have nine years to go.” Does she still keep in touch with this betting partner? “No, I am sure I could track them down though, I could pop it in my acceptance speech, really grass. I just did Nanny McPhee which was so exciting and so enjoyable. I would love to get into writing and performing in feature films, not because I am obsessed with being a star, I would like to write it and just give myself a nice funny cameo. (Laughs) Who knows in this industry… in one second it can all go tits up!”

Katy Brand’s Big Ass Tour Live is touring throughout the country from now until June. To book tickets and for more information visit www.katybrandlaughs.com