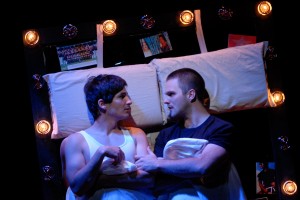 This smash hit Australian production, adapted by Tommy Murphy from Tim Conigrave’s award winning and best selling memoir of the same name, will make its UK debut this Spring. One of Australia’s most celebrated comic actors, Jane Turner (who has an international cult following as the writer and star of Kath and Kim, in the role of Kath) will be making her West End debut, with further casting to be announced.

Falling in love with the captain of the football team at an all-male Melbourne High School in the ‘70’s was never going to be universally popular. But for Tim Conigrave being young and gay in Australia was exciting but uncharted territory.

Holding the Man is an achingly funny and heartbreaking true life story about the relationship between Tim and John Caleo. This multi-award winning play explores the highs and lows of their remarkable partnership and is a celebration that speaks across generations, sexual preference and culture.