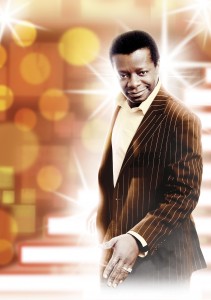 We spoke to comedian Stephen K Amos back in August 2007 prior to his appearance at his sell out shows at the Edinburgh Fringe. Since then, the out and proud funny man has done pretty well for himself.

He’s charmed and entertained audiences all over the world with his easy, relaxed style, intelligent wit and honest warm-hearted joie de vivre. The Feelgood Factor is designed to lift our spirits and look for the positive – just what we need in these gloomy times. Bursting with more fun, warmth, bonhomie and love than ever before, forget the credit crunch, just come and enjoy a man who is at the top of his game!

In the last couple of years Stephen has made a name for himself – appearing on Have I Got News For You, made his mark with a hilarious set at The Royal Variety Performance and triumphed on Live At The Apollo.   His Channel 4 documentary Batty Man was nominated for a Bafta and he made it to the finals of Last Comic Standing.

A gifted actor, Amos has impressed audiences and critics with his performances on stage, and screen, and he has proved not only a gift for comedy but also for more serious roles.  He was Sir Benjamin Backbite in RB Sheridan’s farce The School For Scandal at this year’s Edinburgh Festival – alongside Lionel Blair, Marcus Brigstocke and Phil Nichol.  He has also starred in the critically acclaimed production of Talk Radio at the Edinburgh Festival 2006, directed by Stewart Lee and he appeared in the West End and Edinburgh run of One Flew Over The Cuckoo’s Nest, alongside Christian Slater.

Excitingly, Stephen has recorded his own comedy show for the BBC and a Simon Nye penned sitcom – also for the BBC but for the moment, these two projects are shrouded in mystery.