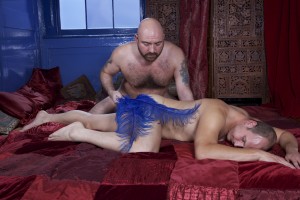 A massage is a massage. Right? It can be relaxing, stimulating, relaxing, invigorating and just about the most intimate thing one person can do to another. However, a Tantric Massage takes you to another depth of human contact and one that left me blissful and complete in so many ways. London, fitness instructor, feathers, preachy,

Michael Dotchin, who some of you may remember from Metrosexuality, has been doing massage for quite sometime after training to be a fitness instructor “one seemed to follow the other”. It was an eventual meeting with Armin C Heining which lead him into the niche of Gay-Tantra massage, something that is quite different from your average massage and which only two people in the UK are believed to practice. “People instantly think of sex when you mention Tantra,” sighs Michael, “but it’s actually a belief and a way of life. I won’t go on about that as it sounds preachy but basically, what I do is use tantric principles to give a different but hopefully very special massage.”

Michael was pleased to discover this new form of massage. “When I started massage I was always asked what services I provided and how far I would take the massage. People were interested in taking it to that very intimate stage and I wasn’t sure how I felt about this. Part of me could understand why people would want that, I mean we all like sex don’t we. I had to have boundaries though. When I found tantric massage it answered my dilemma because although it’s very intimate it’s just part of full massage therapy. The penis is only a part of the body after all. It works perfectly. It also teaches people about their own body and that’s the reason I want to do more”

Like any of Michael’s massages we started off by having a nice cup of tea and a chat. His practice is based in his stunning flat in Clerkenwell, London and you are instantly made to feel very welcome, while luxuriating around are gorgeous cats… everywhere. Before you realise it you have been nattering away for so long you’ve forget that you are there for a massage and haven’t just popped round to see a friend. “It makes people comfortable, which for me is the most important thing. It’s also a way of learning about the person as you can find out a lot from chatting with someone, their body language can give a lot of things away and hints to use later on.”

Then it’s off upstairs for the main event. Michael has several spaces to work as he also does holistic massage as well as Gay-Tantra Massage. The room for the massage couldn’t be more welcoming, with a massive luxurious bed, velvet throws, drapes, relaxing music and cushions everywhere. After a shower (not together!) we naked and it’s on to what is one of the most amazing massages I have ever had, which lasted for over 90 minutes.

My eyes were closed during the whole experience; senses are heightened and using various items such as velvet, feathers, his beard, his full body… you have a sensory experience that is quite unlike anything else and leads to a rather climatic finish. “I like to call it a full body orgasm” Michael laughs.

Afterwards my body is in a state that I’d never experienced before… I was buzzing and electrified by the entire process. Chatting later I learn each massage is different as Michael follows the clients body’s reactions. “If they like certain bits of their back being done, or a certain routine of the massage, then their body will give it away ad so you do that more. If they don’t like something they tense up… so you stop.” Michael likes to get a response to his work and asked what I thought. I have to say I didn’t know what to expect but it was better, warmer and much more relaxing than I thought it could ever have been… and I had high hopes before I arrived.