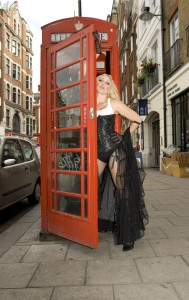 I have to say Madonna here really don’t I? In terms of Lady Gaga though, wow what a year and what an artist. I mean how can you not love her and what she has done this year… and… and… she can sing, it’s awesome! I cant put her above Madonna though as look at career spans. I do really like the Gaga though. As for Kylie she is sweet and all but until Can’t Get You Out of My Head I didn’t really know who she was… I do now of course.

7/10 We would have liked to have had some dirt on Madge but what can you do? We do like the fact that there is clearly the fickle factor here which we gays are so prone to and embrace.

Saying dressing up as Madonna for a living isn’t going to cut it with you is it? Hmmm what’s the campest things I have done… there are so many. Swallowing a goldfish whole isn’t camp is it? Why did I do it? We were playing Madonna’s Truth or Dare, it was a tour thing. Camp, camp, camp? Well I did once get on stage in my Madonna drag, I call it that even though I am a woman, with goggles and a duster in one hand and a stuffed hamster in another and dust Elvis and his dancers bottoms during Jailhouse Rock. What happens in Vegas stays in Vegas.

9/10 Dressing up and being Madonna for a living would have sufficed as being pretty much one of the campest things you could do other than actually being Madonna. The Elvis thing is just crazy and creates quite an image. One mark deducted for Goldfish swallowing, especially when adding how she could feel it swimming when it had been swallowed.

Oh dear… well you see the thing is. Sometimes you will have been looking for the perfect outfit for you and your dancers that needs to be cut and ripped… I couldn’t deface Prada, their designs are heavenly, I do like Primark. Oh Prada though… it’s just so… (goes of into a Prada dream world).

10/10 You needed to be there to see the dreamlike look on Melissa’s eyes when she vanished off into that distant fairy Prada land. We also love the fact she uses Primark and isn’t ashamed.

What a stupid question. I mean really, do I even need to answer that.

9/10 True it is a silly question… but some more expansion would have been nice, you know telling us how amazing we are, giving us her complete devotion.

Not so much. I mean I do but really here it all still goes over my head. I don’t know who anyone is. Example… for ages I was thinking ‘wow Katie Price and that erm… Jordan, that’s the one, don’t they look a like… and they had the same boyfriend and everything. I am hopeless with British celebs. I will get there though and then maybe we can gossip more.

10/10 Just for thinking Jordan and Katie Priceless were two different people but shagging the same guy… whilst being in all the papers. In this case innocence on that subject really is bliss.

What’s your best one line put down?

I used to be a bartender in Chicago and when pain in the ass people would come up and just rudely shout ‘make me a gin and tonic’ I would do jazz hands and go all David Copperfield and say ‘ta-dah… you’re a gin and tonic’. See I don’t do mean really. I don’t want people to be scared of me and weirdly when I dress up as her Madonna-ness people get a little scared.

8/10 She may not be nasty but we know secretly Melissa loves a good bitch, she cant hide it from us we do it so often too!!!

Do you have any dressing room demands?

(Laughs) I am just grateful for a dressing room these days it has to be said. Back when I was doing the shows in Vegas there were plates of food, flowers, towels the works. Now I am a club hopper, some are nice and some… well… My demands on a cold damp British night are; a shot of your cheapest brandy, generic red bull of some sort and the remnants of a roll of toilet paper!

10/10 For almost making us wet ourselves.

What’s the biggest diva strop you have ever had?

Oh it was all because of Facebook and Blackberry’s, can you believe it? I honestly don’t do diva strops I really don’t. But one of my dancers for Manchester Pride put on his status he was rehearsing with me at Pineapple dance studios and in minutes I get a text from an ex-dancer who I might have fired (laughs) saying why aren’t they on tour with me. This guy super-glued his passport photo back onto his passport so when I flew them all out to Romania he couldn’t get in. His mum had to be brought out. I went off on one then, and again in a text. It’s rare, but it happens.

9/10 Anyone who can go off on one in a text is sooooo able to kick off. Also loving the fact that a diva strop was caused by such random things… facebook, Romania, blackberry’s and a dance studio – how 2010!!!

How many gay weddings have you been too?

Well I have been invited to lots… but I always miss them. It’s too bad as I would love to go to them, in fact I would like to become The Gay Wedding Singer, wouldn’t that be amazing. Once some fans of mine came from their wedding early to see a show of mine, which was very kind of them. I love you guys!

20/10 Yes we can give marks like that… for acupuncture for a dog how could we not. It is bordering on Paris Hilton like behaviour. It makes up for the Goldfish incident too!

99/100 Melissa Totten is one of us, we love her, we want to stalk her and become her very gay best friend. We have a feeling we may have quite some competition there though.

Melissa Totten’s new album ‘Madonnalicious’ Melissa Totten vs. Klub Kids is out now on iTunes or you can buy it whilst finding out much more about her at www.melissatotten.com