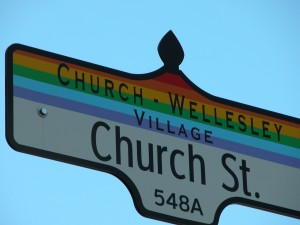 Toronto is the capital of Ontario and the biggest city by population in Canada. Located on the northwestern shore of Lake Ontario, it has 2.5 million residents and is a leading financial centre in the global market. Its cosmopolitan population comprises British and French influences, as well as the obvious Americanisms, with over 49.9% of its people originally born outside the country. It is clean, has low crime rates, a high standard of living and a welcoming attitude to queer travellers—especially those from the UK.

Getting Around
The city is a whopping 630km², with the longest distance between points being the 43km from east to west. The Toronto Transit Commission is the third largest of its kind in the whole continent, and as such the city is well-serviced by trams, buses and a subway. Taxis are also relatively cheap. It’s advisable to buy daily TTC travel cards, which can be used on any public transport, as this will provide the cheapest, most versatile way to get around.

Toronto Pearson International Airport is a new, sparkly thing located on the border of Toronto and Mississauga and is the main airport for international travellers. However, journey times will be some 30-40 minutes to the city centre, and taxi fares will reflect that, so you may want to consider picking up your TTC day travel cards at the airport and using public transport instead.

Sightseeing
Most visitors to Toronto will want to see the CN Tower. The Tower can be seen from most parts of the city, except when foggy or cloudy, and was the tallest building in the world for 30 years. Visitors can go to the top of the tower and take a wonderful view of the city laid out below, although bad weather can at times obscure all visibility.

The Bata Shoe Museum gives an interesting look at various footwear-inspired exhibitions and the Royal Ontario Museum contains exhibits with a global as well as national focus.

The Distillery District allows visitors to check out the making of two tourist favourites: beer and chocolate. The smell of hops and cocoa is wonderful on a crisp autumn morning and if you’re feeling suitably brave, you can even take a segway or ebike tour of the district.

Shopping
Most of the city’s prominent shopping attractions are based in Yorkville, where the glitterati descend during the Toronto International Film Festival. Shops as diverse as American Apparel, Mexx, H&M and Levi’s can all be found here, and for those with bigger needs Toronto Eaton Centre is the city’s largest mall.

Chinatown and the bohemian Kensington Market also have some interesting boutiques worth checking out, and the exchange rate means you’re bound to get a few bargains. The latter is known not just for its clothes and trinkets, but also for its fresh food, galleries and multicultural atmosphere. The market also homes the city’s only two open cannabis cafés: The Hot Box Café and Roach’o’Rama.

Dining Out
Most of the restaurants are located in Greektown, which has one of the highest concentrations of restaurants per mile in the world. Casa Loma, the country’s most famous ‘castle’, is located here, and although the building is small by European standards, it is still impressive. The famous Taste of the Danforth festival is held here each year, showcasing the best in Greek food and culture, and falls in the second week of August.

On Church Street, in the heart of the gay village, is Fuzion, an excellent restaurant located in an historic Victorian property. The cuisine is a sumptuous blend of styles in a very provocative and modern fashion. Next door, offering more mid-range Italian cuisine and an interesting tapas-style menu, is Voglie. The décor is more modern and the dishes more familiar than its edgy neighbour, and the cocktail list is definitely worth giving a try.

Finally Fire on the East Side doubles as Fly Nightclub downstairs and round the back, serving contemporary dishes with reasonable price tags.

Byzantium was officially the first martini bar in the city, and here you can enjoy flavoursome cocktails on the designer outdoor patio or party hard when the walls slide away inside to open the bar/restaurant into a lively party arena.

Woody’s and its brother bar Sailor are solid favourites of the locals, with bulge and butts contests, muscular barmen and a thriving crowd of all ages.

Hair of the Dog is a traditional pub with modern flair, serving some of the most absurdly (and unPC) named cocktails in the city.

With thanks to the Sutton Place Hotel.