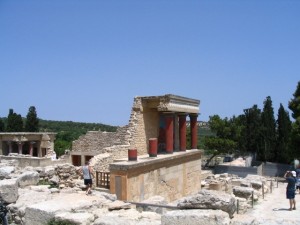 The island has outlasted myriad invaders – from Romans and Byzantines, through Arabs, Ottomans and Venetians, to integration into the modern independent Greek nation, German invasion, then liberation! Throughout it all, Crete has maintained a fierce identity well-nigh bordering on independence. High up in the mountains, its plucky resistance fighters were famously never defeated by any invader – and even remained mercifully aloof from the post-WW2 civil war that ravaged mainland Greece.

Crete’s scene is small, with just one gay bar proper, in Malia; a few gay-friendly places in capital Heraklion and other towns; plus numerous nude beaches.

One thought on “Queer Crete!”