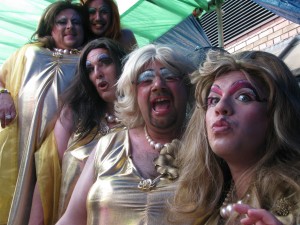 Bears Aloud; Andy, Roger, Gary, Daniel ands Martin, have become something of a phenomenon. Appearing at various clubs and gay pride events, they have literally been taking the crowd by storm. What on paper at least should not work… does. Five hairy, XL guys (well all except one and they’re fattening him up), slapping make-up on over their beards, donning extravagant wigs and slipping into shiny frocks are transformed into an entertainment tour de force.

Adopting the Girls Aloud personas, the guys deliver something that is not quite a tribute act. Roger aka Sarah – who was one of the original instigators of the band explains how it all came about. “For a laugh I wanted to frock up for our local Drag Idol charity show. I thought it might be funny seeing a less-then-glam drag act take to the stage. I was thinking of miming to a Girls Aloud number but as soon as I to talk about it to one or two others… well… that was the start.”

Unlike the Spice Girls where Two Became One… this one hopeful drag queen quickly accumulated others as the idea just blossomed. Pretty soon five rough and ready, unshaven guys became the campest bears around as they discussed the concept of doing more than just the one charity gig and performing one song. Fuelled by the equivalent annual alcohol intake of a reasonably sized Scottish town the group set to work and planned their future.

Andy aka Cheryl adds, “We toyed with a number of names – Bearnanarama, Spice Bears, The Nolan Bears… but Bears Aloud seemed to fit… and the more we talked and drank… the more fitting it became.”

The guys are all friends, having known each other on the heavier side of the gay scene for many years. However, even with their gruff bear background they were worried just how that particular community would take to them. They need not have worried as every audience and every performance has attracted more and more fans to the cause. They aren’t sure just what that cause is… but the sheer hard work they put into their dance routines, their changes of outfits (or pie breaks, as Bears Aloud knows them) and their hour-long act, has converted quite a few ‘husky’ gentlemen to wish they had been brave enough to don the occasional frock.

Gary aka Nadine thinks the world has gone mad. “At Leeds Pride we came off stage and mothers were emptying their prams of kids to thrust them into our arms for a photo. I mean, what is that kid going to grow up thinking…?” Martin aka Kimberley interrupted. “And the number of bears who’ve said that we’d not only given them a laugh but were envious of our guts (no pun intended) to get up on stage and … well… do it. Also, we were surprised when professional drag acts began taking an interest in us… often suggesting us for shows and offering advice. It’s mental.”

Their wigs (inspired by the women of Wallace and Gromit), their sparkly outfits and their sheer originality have set them on a path that might just lure them away from their daytime jobs. The future looks bright as they plan on adding more to the act; live vocals, more audience participation and chat … and, if they have their way, more pies. Fans are already coming along with their latest Sarah Lee cake creations and appreciative savoury pastries to place at the feet of their sweating hairy idols (though not for long as they soon find their way backstage). So, all is looking pretty good in the Bears Aloud camp. I asked the cub-like Ginger (the slimline Daniel who is the quietest member of the band), where he thought they’d be in a year’s time. A contemplative look formed on his youthful, un-hairy face as if in deep debate, fully considering the depth of my searching question. His eyes scanned the room as he looked from colleague to colleague. Then, as if in a natural rhythm with each other, they raised yet another foaming pint to their collective lips as he gave his opinion.