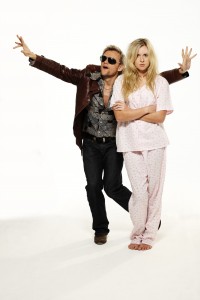 “Oh my god that’s such a hard question, you have started with such a hard question… are you going to be one of those journalists?” Diana Vickers has a northern drama about her that I instantly love. Standing in front of me, she has her arms outstretched pretending to look vexed while grinning from ear to ear. “How can I decide if being in front of Simon Cowell or the opening night is more stressful… we haven’t had opening night. I fear press night will be worse you know, why do they make you wait weeks before press night?” Diana takes a breath… a quick one. “You’ll be judging me then… from Simon Cowell to Simon Savidge… that’s a good name for a judge isn’t it? If any X Factor judges leave you should go for it.”

Diana first came to the public’s attention when she went from the auditions on X Factor to being picked by the current ‘Peoples Princess’ Cheryl Cole who mentored as she progressed through the competition. She had an individual style, some might say a marmite voice (you either loved it or hated it… I love marmite) and didn’t like to wear shoes. As far as us gays were concerned, we were won over by her cutesy girliness and she seemed the obvious contender to take on Alexandra Burke in the final but then things changed. “I got sick, which was THE worst thing, like ever. I didn’t want to quit but I couldn’t sing… literally could not sing. Then there was the whole Eoghan (Quigg fellow contestant and reported new beau) thing. I knew the media were turning on me and that they would make the public turn. I knew I wouldn’t win then.”

Diana looks back thoughtfully because, although she says it was wonderful working with Cheryl, she found being in the spotlight a bit more difficult than she thought she would. “It was really hard. I got homesick quite a lot. Cheryl was amazing but you can’t have lessons in being famous and you never know how people will react or you will react to it. It was amazing though and look what’s happened since, I couldn’t slag it off.” I wondered if there were any tensions between the acts. “I still speak top Ruth all the time, I love her, she has a massive gay fan base doesn’t she, and Alexandra I text a lot oh and Cheryl, oh Cheryl… she has been just great.”

When Diana heard about the role of Little Voice it was “a dream come true” as she had always wanted to act. “Singing is my utter passion but I had always wondered if I could get into acting and this is a fabulous show because it combines the two.”

I find it interesting that someone who went through such a public audition process as X Factor… in front of all those people could still get nervous. “That’s just it though, I worried the director, the cast and the crew would think ‘but she’s from the X Factor, who does she think she is?’ fortunately that hasn’t been the case and everyone has been lovely. I think I have worked really hard though… I mean… I have to be able to sing like Judy, Shirley and many other big divas and icons. Judy Garland has a big gay following doesn’t she? I have to literally be able to mimic all their voices and mannerisms in this show. I wonder if that’s what being a drag queen is like. I want a big gay following.”

So, what happens after Little Voice, are there any other roles she would like? “Elphaba in Wicked… I know all the words but before I o anything else stage-wise, it’s work on the album, which is all recorded and ready. I wouldn’t want to compete with Alexandra and Cheryl by bringing anything out now, both of their stuff sounds amazing.” I ask her what we can expect from a Diana Vickers album. “I reckon people expect the video to be me in a field barefooted surrounded by hay and sheep playing a ukulele or harp or something and singing folk music… so they are in for a surprise. It’s a real mixture of sounds. I want it to really surprise people. I would say expect the unexpected, in fact I might make that my motto, or tag line. Diana Vickers expect the unexpected.”

To get tickets for Little Voice which is on at the Vaudeville Theatre London visit www.littlevoicewestend.com for more information on Diana and everything up and coming visit www.dianavickersmusic.com