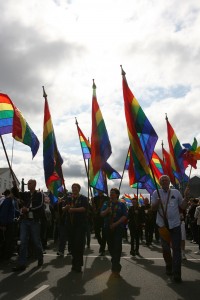 Although not necessarily the place you would imagine to have a gay pride, Reykjavik in Iceland certainly puts on one hell of a show with its annual four-day extravaganza. The island is very liberal, with an out and vocal lesbian Prime Minister, and this kind of attitude clearly shows with almost 20% of the country’s population in attendance.

Like many such events around the world, Iceland Pride has various attractions to attend. However, one I particularly enjoyed was a Queer Cruise, and no, it’s not what you are thinking. It’s an evening cruise around the capital’s bay overseen by Iceland’s only openly gay sea captain. You don’t really need to find your sea legs as you’re dancing all the way out to Puffin Island and back. It was great fun and offered an opportunity to see the city from a different perspective

Pride, being the countries third biggest event of the year, has a lot of effort  put into the parade with themed floats; Dykes on Bikes, Drag Queens, a Gay Football team and entertainers from the bars and clubs from around the city. It seems that everyone wants to be involved and makes for a fantastic atmosphere. Reykjavik is a very cosmopolitan capital and nearly all the bars and restaurants had a ‘Welcome Pride’ banner and special offers for the event. The locals say that there is a happy mix in the capital so everyone goes where they want without much trouble. However, I found my way to Club Barbara, which is as camp as tits (they just love pink) to meet up with all the cuties that had found their way to celebrate their gayness. Mind you, it was strange leaving at three in the morning with a ‘special friend’ and you’re almost blinded by the brightness. This time of year (weather permitting), you get almost 24 hours of daylight.

For me what separates this Pride event in this most northerly of capitals, is the fantastic scenery and the genuineness of the people.

If you fancy a break from the norm and the idea of a trip to Iceland (not the supermarket) tickles your fancy, I would recommend this destination for a weekend break, or a week for the more adventurous gays at heart.

More info on the next Reykjavik Pride    www.gaypride.is