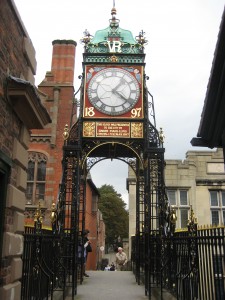 Hugging the North Wales border, Chester is one of England’s most historic towns – with significant remains dating back to Roman times, contrasting most pleasantly with its present-day roaming hoards of hot young boyish cuties… and the cast of Hollyoaks.

Indeed, this wonderfully walkable city is crammed with things to do and see, including its unique and famous well-nigh complete City Walls, with their “Wishing Steps”; the canal and locks; The Rows (two-tier shopping galleries dating from the Middle Ages); the Cathedral; Roman Ampitheatre and old-stone-brimming Roman Gardens; historic Roodee racecourse; and even the second-most-photographed clock in Britain after Big Ben – the Eastgate Clock.

There are a whole host of walking tours, two of the best of which are History Hunter,which traces 2,000 years of action-packed history from the 20th Roman Legion building Fortress Deva to repel Welsh Tribes, through William the Conqueror’s armies building a Norman strong-hold, to Cromwell’s troops besieging Royalist forces in the town, during the English Civil War; and A Taste of Chester www.tastecheshire.com) including samples of local produce from around the region – and not just cheese!

Feet too tired? Then hop on a live-commentary CitySightseeing bus, Apr-Oct. Or take a river cruise on a ChesterBoat (www.chesterboat.co.uk), running throughout the day, throughout the year – a relaxing 30 minutes afloat, journeying up and down the River Dee, beneath the Suspension Bridge, past Grosvenor Park and The Groves, following the long sweep of The Meadows.

Chester is by no means purely a city of the past. It can offer up-to-the-minute entertainment and excellent shopping facilities – plus loads of young hotties, on an emerging gay scene!