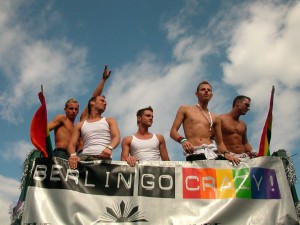 Rich in culture and spectacularly sculptured out of its history, Berlin is one of Europe’s most popular city-breaks. Adam Tamsett checks out if it really does have one of the most liberal and cosmopolitan gay scene’s around.

A hotspot for new ideas, hedonism and hippies, the German capital is the perfect getaway – a trendsetting city in every sense that is guaranteed to engage. From the Brandenburg Gate to the colourful cafés and fashion houses in the East, if one thing’s for sure, you can never be bored, and you’ll embrace a city that doesn’t shy away from its chequered past.

Obvious reminders remain on the streets as you can see various restored remnants of the old Berlin Wall at a few locations around the city, and the wall’s former path is marked in the floor throughout the city.

The new DDR museum (www.ddr–museum.de) takes a light-hearted approach to East German socialism with an interesting collection of artefacts and everyday items including the ‘Trabi’ – almost the only car that you could get your hands on in East Germany before the break-up, and gives a fascinating insight into the not-so-distant past.

Thankfully, gay Berlin is not hard to find. They have a gay mayor, a gay museum and some of the most pro-homo laws in the land.

Most of the activity is around two main areas. Around Nollendorfplatz, you’ll find what’s locally described as the Rainbow Village lined with pubs, bars and restaurant. Amongst them is Tom’s Hotel (www.toms-hotel.de) which is one of Berlin’s longest established gay bars, with a loyal local following. Author Christopher Isherwood used to live in the neighbourhood where he was inspired to write the material for the musical, ‘Cabaret’, and it’s easy to see why!

Contemporary hangout Blond is one of the best chill-out bars in the area, with cocktails and a modern but friendly atmosphere. Off the beaten gay track, in the district of Mitte, the tiny but fun Betty F*** bar is one of the most unique bars I’ve experienced. Themed after former first Lady, Betty Ford, the bar has a unique style and décor have to be sampled on any trip.

Berlin’s club scene is mainly focussed on a number of themed nights throughout the city.  Amongst the regular venues, are Haus B (www.dashausb.de) which is the city’s cult venue for the younger crowd and mega-disco atmosphere make it one of the Berlin’s most crowded venues. Top European DJS make Berghainn (www.berghain.de) the favourite club for electro music fans, and is housed in a gigantic former power station.

Berlin’s real shopping strength are the quirky outlets found mainly in the former East half of the city where you’ll find trendy Berlin fashion labels like Eisdieler and Thatchers. In Mauerpark, you’ll find a range of retro 60s/70s gear in independent boutiques.

If more high-street fashion is your thing, then the area around Wittenburgplatz has many of the chain stores you’d expect, alongside Europe’s second largest department store after Harrods, KaDeWe, which could easily entertain you for an afternoon or more. On the ground floor is the Luxury Boulevard featuring Gucci, Louis Vuitton and Cartier, and the spectacular sixth and seventh floor host a luxury delicatessen the size of two football pitches

Next to Ka-De-We is the superbly converted Ellington Hotel (www.ellington-hotel.com). The hotel offers a great way to see the city in real style with its classic minimalist white interior. Like everything in this city, the building has had many changing faces. From wartime ballroom and jazz to club to bank at the fall of the Berlin Wall, such greats as Louis Armstrong and Lou Reed have played here, and this jazz theme carries on throughout the hotel with art and many original features still conserved. The hotel is the ideal base for a weekend break.

For those on a cheaper budget, the gay-owned Le Moustache pension (www.lemoustache.de) offers a friendly welcome from host Günther. Its central location allows you to experience many sights in the city centre by foot.