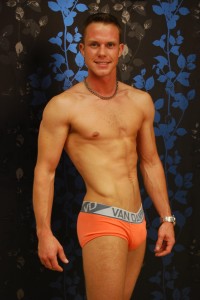 Yes, at last – I’ve done it again! My first movie shoot in three months – and gees, have I missed it! It’s such a great feeling to be on a movie set – there’s so much more atmosphere, and it’s certainly much better than the solos and duos that I do at home on the kitchen table!

The last few months have seen me working alone for my site. I had to do the design and the programming, not to mention the selection and production of the content. As you know, the vast majority of the content for the site is produced exclusively for www.Johan-Volny.com, so I’ve had to do a lot of wanking and shagging of late and haven’t had anywhere near enough time to do other movies

After the scene we Czechs all ran to the showers whilst the Belgian guy began to clean himself off with some towels. Second big mistake!!! After all, we all knew that the boiler for the showers wouldn’t have enough water for all us models. As a result, the poor cum-soaked Belgian had to clean himself off with cold water – whilst the rest of us were all enjoying our first beers!

Well, as summer has now finally arrived in Prague I’m changing my fitness routine, with much more biking and jogging, and less time in the gym. Needless to say it’s much more fun to cycle with friends through the woods and across the mountains, and I’m surprised at how much weight you can lose whilst doing it. Indeed, one hour of cross-country cycling is much more efficient than 3 hours of weight-lifting.

OK, a friend of mine is already waiting for me outside my door with his bike… so that’s what I’m off to do right now

Until next time, take care