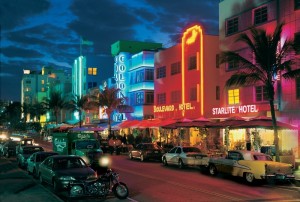 Adrian Gillan steers you around the Art Deco, palmed, sea-view chic that is Miami.

When the railroads reached Florida in the 19th Century, they brought along rich, leisured Americans seeking sun. The roaring twenties were interrupted only briefly by depressions and hurricanes; then increased migration and resultant poverty from South America and Cuba brought in the notorious drugs-fuelled 80s crime spree – Miami Vice and Scarface times –now, thankfully, all gone; to be replaced by A-list celebs and beach-loads of queers – not least along South Beach’s famous sandy spit!

Miami’s South Beach – or SoBe (pronounced “so-bee”) – has the colour of Rio, the intensity of Manhattan and the tropical ambience of the Caribbean, all on a long island just a 10-minute drive east of Miami’s main Downtown urban sprawl.

SoBe boasts one of the world’s most significant, and thankfully now nationally protected, swathes of 1920s and 30s Art Deco hotels and residences – each one as individual and scrumptious as a well-iced fairy cake, all with glorious pastel hues which take on a brand-new dimension of luminosity when lit up after dark. The Miami Design Preservation League runs regular daily walking tours of the district.

Due west of South Beach, over the causeway, the Little Havana district attracts, with its colourful murals, monuments, Cuban characters, coffee and cigars. Whilst there, pop into buzzing, cheery Versailles (3555 SW 8th Street, Miami;) for authentic, great-value and delicious Cuban cuisine.

There are loads of gay-friendly grubberies along Lincoln Road Mall. For home-from-home, try Balans (1022 Lincoln Road Mall;) – a US outpost of those fab London stalwarts. Or try the queer-buzzing Palace Bar & Grill (1200 Ocean Drive;), right opposite the gay beach on the front.

If still on the prowl, “take airs” in South Beach’s Flamingo Park 24/7; or, by day, check out the herds of preening pecs on the gay beach opposite 12th Street. Haulover Nude Beach on Collins Avenue at 108th Street is even clothing-optional.