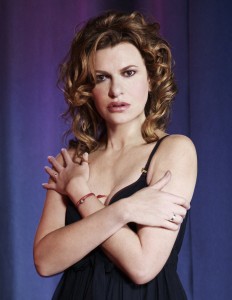 Sandra Bernhard is a gay icon. From her days as ‘Nancy’ in Roseanne to her cabaret, burlesque, social commentary and rock ‘n’ roll’ shows, her friendship with Madonna, her controversy… we could identify with her and she made us laugh. Now she brings her cult show ‘Without You I Am Nothing’ back to the UK and we sent Simon Savidge to catch up with her.

You’re bringing ‘Without You I Am Nothing’ back for an anniversary show, I wondered what made you want to bring that specific show back as it wasn’t your first show….

It was genuinely by demand from my fans. I guess when you do something that is, for some people, a kind of cultural signpost they want you to do it again. I am not the kind of performer who generally, in the course of a new show, pulls out old material so I hadn’t done any of it since. The fact it falls on its 20th anniversary seems quite special too.

Is it nerve-racking bringing it back after the success it had, it was a seminal piece?

Nerve-racking … erm not so much… though I do get nervous before every show, which people don’t tend to think I would, but really I do. I have added a few bits and changed the sounds of some of the song to make them slightly more up to date but really the whole thing hadn’t aged. I have… the show hasn’t, which is quite unfair (laughs).

Was it quite nostalgic?

Definitely. As the show was pieces from my life… things I have been through and experienced. It was nice to return to what felt like a friend I hadn’t seen for a long time and catching up.

It does seem a nostalgic time with people looking back at the eighties in real fondness. If Roseanne was to come back would you do it?

Is it exciting to be back in the UK?

You know any excuse to come to the UK and I am excited (laughs) it sounds really false when people say “I love the UK” but I honestly do. I love London and I get inspired by Europe in general. I cant wait to see my gay audience… without you I am nothing (laughs). That was quite dramatic wasn’t it?

You have a huge gay fanbase…

I should hope so. I think I speak out which helps. I am not afraid to say what I think, I get irony and I am open to everyone. I guess I am quite campy and can be quite emotional and over the top and people like that.

You write, you sing, you act and perform, if you had to choose one of those which would it be?

Oh my god! That would be impossible. I don’t think I could choose. I think all of them really interlink. I started performing and making people laugh when I was about five, from then so I see it as a gift. I love the fact strangers want me to make them laugh. You know, even when I am buying a sandwich and I love that and will always try and make folk laugh. I like to oblige my public (laughs) if I can make you laugh… I’m there.

You have always been quite tough on ‘fame’ in your shows but what are the perks of it… after all you are famous?

You know I look back on the shows where I would slate fame and think ‘but at least back then people had gotten where they were with talent… or some talent’. I want people to do it the old school way like Pink… she has worked so, so hard and is genuinely talented… that’s how it should be. Sadly, now anyone can be famous for the most banal reasons and everyone can have their fifteen minutes of fame, which sometimes is fifteen minutes too long (laughs) but now it’s about hype not longevity. My favourite thing about fame is genuinely meeting people, the other side is being quite political… I can  say things that get the right causes noticed, that’s great.

We mentioned Roseanne earlier, do you ever get annoyed by people asking that, like I did, or asking about your friendship with Madonna?

That’s a very clever way of asking me isn’t it (laughs)… I love you gays. I don’t mind as much about Roseanne because she employed me and because it was an amazing show. Also, I am still very good friends with her so, in that way, it’s a relevant subject and relationship. I guess the thing that bothers me about Madonna is ultimately it was a period in time and I don’t get why people find it so fascinating so many years later. I find that more interesting than talking about her. There is no light I can really shed on her.

Yeah I know… but I think they should look at how few friendships she keeps in her life and see that (laughs) that’s not actually something to aspire to. I am so lucky with the friends that I have. I do have some ‘celebrity’ friends but I also have friends who are real people… you know we could become great friends. I try and have friends who keep me grounded, she doesn’t do that and I find that quite sad and weird.

Does it ever annoy you that you are labelled ‘controversial’?

Honey when they stop saying that, that is when I am gonna get irritated (laughs). I think being truly controversial, not any of this superficial way just for the sake of it or for selling yourself, is really important. If I am not doing that… I am not doing my job properly.