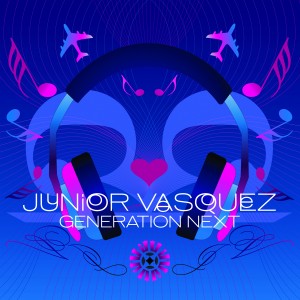 “I’ve been at the top of my game for years,” asserts the legendary DJ who has recently released his first continuous compilation in three years: Generation Next. “House music has changed a lot since my days spinning at Sound Factory and Twilo and I pride myself on always having been able to stay one step ahead of the curve. I see what gets the crowds going at my New York parties and on the dance floors at the mega-clubs I’ve been playing around the world lately and I just harness that energy in an album.”

Generation Next is a relentless 14-track compilation that pulls listeners in from the first beat to the last.

“Generation Next embodies everything great about Junior Vasquez,” says Silver Label’s Victor Lee, the producer who encouraged Junior back into the studio. “We’re always looking for the new sounds and cutting-edge producers. With Generation Next, you get both—delivered by one of the best DJs in the business.”

Featuring two new Vasquez studio stormers (the groovy progressive jam “I Love Music” and the brash, gospel-infused vocals of songstress Maxi J. on the big-room blaster “Insecurities”), Generation Next adds a bold exclamation point to the litany of legendary tracks the DJ has produced over the course of his decades in the business. It’s a dark, sexy and uncompromising dose of high-energy house that emphasizes Vasquez’s relevance and enduring ability to create the choicest cuts in the genre today.

Junior Vasquez is credited with inventing the full package of DJ as Brand, Image, Personality, and Superstar. “I’m the definition of the ‘rock star life,’” he says of his globe-spanning, revolutionary career.

He admits his wild ways have caused him to burn a lot of bridges along the way; including a very public feud with once close pal, Madonna.

“That one will haunt me for the rest of my life,” says Junior about the infamous track “If Madonna Calls,” a mix that layered a personal answering machine message from the Material Girl over a hard tribal beat. Once Madonna learned of the track, she cut off all ties with the DJ. “I was stupid,” admits Junior. “I thought I was being clever.”

But even Madonna might appreciate the brave and bold approach Junior has implemented to reinvent his sound and image throughout the years. “I like being controversial,” he says. “I won’t stop that. I’ll keep doing whatever I can get away with. Because if you don’t cross boundaries, you don’t get attention.”

Especially these days, when the current depressed climate of the music industry makes it harder than ever for dance artists to get attention.

“Today, there are fewer and fewer places to go to hear great house music in the United States,” says Lee. “But the audience for house music is still out there—in fact, there’s a whole new generation of fans of the genre who never got to experience the decadence of Junior Vasquez’s days spinning Arena or the eclectic crowd that packed The Tunnel week after week. Generation Next is especially for them. It takes Junior’s sound from the big-room to the living-room with all the drama and intensity you’d get from him in a live set.”

Decidedly forward-looking in its sound, Generation Next showcases fresh cuts from some of the hottest up-and-coming spinners working the decks today: Nick Harvey, Rubin Vega, Twisted Dee, DeMarko!, and Bimbo Jones are but three of the young talents who add their progressive perspective to the compilation’s massive BPM-barrage.

“I’m at a point in my life where I’m comfortable in my career and happy to share the spotlight with the next generation of DJs who are inspired by me,” Vasquez says. “They’re the ones who will ultimately carry on my legacy.”

“Of course, I don’t plan on leaving this scene anytime soon,” Vasquez smiles. “I’m still having too much fun.”