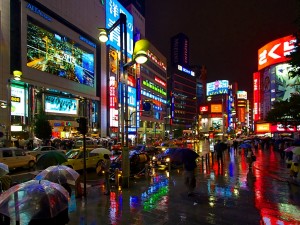 Whilst emperors stayed out of the way in old capital Kyoto, their shoguns – military rulers who had the real power – made Tokyo (at that time “Edo”) their seat of government from around 1600 onwards, so placing it on the map, with a flowering of economy and culture. When American gunships arrived in the 1850s, forcing the opening of trade and commerce, the shoguns’ days were numbered and imperial power re-emerged, with the emperor relocating to newly-dubbed Tokyo in 1868, thereby making it capital. Partly fearful of falling behind the rest of the world, when Japan opened its doors, it quickly devoured Western culture and technology – stalled only by the great 1923 earthquake. But the country also became increasingly militarised and expansionist – making incursions into Asia and even taking on America and allies after Pearl Harbour in 1940. Defeat, post Midway and atomic bombs, left Japan humiliated and in ruins. Sovereignty was only handed back in 1952. After a boom in the 60s, 70s and 80s came the bust of the 90s which Japan is now pulling itself out of. Jap pop: 130 million. Greater Tokyo pop: now over 13 million. No visa needed for short stays by Brits. No jabs. £1 = 200 yen approx.

Tokyo is a city best “experienced”, so here are 20 must-dos…

Via Japan can – in addition to travel, transport and hotels – organise most of the above experiences, and many besides; with a range of tours and hands-on cultural activities, from traditional Taiko drumming to calligraphy and kite-making.

Tokyo gay bars tend to be numerous, yet small and niche – not all of them foreigner-friendly. Those that are are packed into the compact Shinjuku Ni-Chome sub-district. You’ll soon master the local address system (eg Shinjuku 2-12-3 = Shinjuku area sub-district 2, block 12, building number 3)…