Washing-line blues (and reds, and whites and greens…) 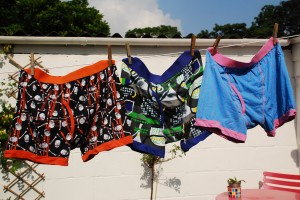 I thought I would hold up my hand and confess to something I really get off on – washing line voyeurism. Yes, I know it’s pathetic but on any journey I find gazing out from the bus or train, and watching people’s washing go flashing by the window, helps pass the time.

My train journey from home to the city takes about 20 minutes and in that time, it passes through middle-class suburbia… to some of the grittiest urban estates. To see the difference in what people put on their washing lines is quite staggering. My personal fetish is for underwear, so I’m only interested in what smalls are left out to dry.

The train journey is great for viewing this spectacle and it’s always a pleasure to see a row of pants being blown frantically by urgent gusts of wind or hanging peacefully, pegged out, in the sun’s early morning rays. At the beginning of my journey, out in suburbia, everything seems a lot cleaner and arranged more neatly. All the white pants are put together and all the coloured items seem to be hung out in some form of colour coding. Despite that, there are often horrendous sights, like the big baggy Y-fronts that seem to billow out to frightening proportions or the line of recently washed grey briefs, that were once white. A few designer brands and the odd silky item peek out between the shirts and jumpers but these days there appear to be an abundance of cheap coloured cotton trunks and pattered boxers hanging in the breeze. However, my most favourite recent memory is from earlier this year when the train broke down a couple of miles from the station.

All the other commuters on board were losing their cool because even at that early hour… the train was hot a sweaty with both the heat from the people and the weather. Meanwhile, I just gazed out the window at a wonderful sight. In a council estate back garden opposite my window stood a young man in his early twenties. He was just wearing a pair of black jeans undone at the waist that revealed a pair of white cotton boxers snugly hugging to his narrow hips. No shirt, just a tight, well muscled body with a sprinkling of curly hair on his chest. He was surrounded by three young children out playing in their none-too-tidy back garden catching some of the morning’s early sunshine. One of the children was laughing as his father was pushing him ever higher on his swing. It was terrific to watch this strong, virile, young guy with a perfect chest and abdomen obviously enjoying this simple pleasure with his son. I was also enjoying the display, as with each push the tight jeans and the white pants filled my mind with erotic thoughts.

As he was doing this, his wife was working her way along the line hanging out her weekly wash. It was wonderful to see, in amongst all the kids’ Thomas The Tank Engine and Batman underwear, a pair of faded paisley cotton boxers that had obviously been washed several hundred times. I imagined these were the dad’s favourite pants, the ones he wouldn’t part with no matter how tatty they got because they held some special memory for him. In my mind I was part of that memory when, as a teenager, the then un-family man had shared a passionate night with me. When both he, and his new cotton paisley shorts, had been sexually christened and my M&S cotton briefs had also been blasted with two different loads of milky fluid as we climaxed in our shared erotic high.