Adrian Gillan delights in the medieval Moroccan molly-Mecca of Marrakech! 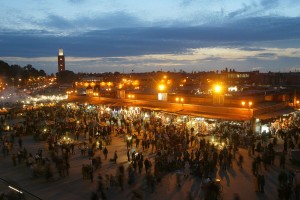 This ancient Southern Moroccan “Red City” (more salmony-pink) – scarce 3½ hours away by jet, yet at the foot of the Atlas Mountains, on the shifting skirts of the Sahara – has, in its historic Medina core, scarce changed over centuries, with narrow alleys and hustling stall traders. Make way for load-bearing donkeys swaying through crowded lanes as Berber muezzins waft out deep-throaty calls; saunter through magical gardens and palaces out of A Thousand and One Nights; sip mint tea overlooking bustling markets and souks, where snake charmers and rent vie with vendors for queer attentions. Shambolic, noisy, dirty, yet always enchanting, 1.6 million-populated Marrakech’s spicy mix of Arab, African and Euro cultures will weave its timeless spell. Steam rises from ancient baths, as boys abound.

Outside commerce has helped forge Morocco since Roman times. More recently, the Brits boosted trade; then France ran the country as a colony from 1912-1956 – hence it is Francophone (alongside Arabic); and hence the French influence in Marrakech’s New Town (a.k.a. Ville Nouveau or Guéliz) zone to the south and west of the old Medina, with its vaguely Parisian-style mansions and boulevards. Year-round sun. £1 = 15 Dirhams; and your money will stretch as far as the nearest bar serving alcohol!

WHERE TO EAT, BOOZE ‘N DANCE 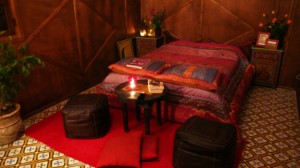 Morocco is a Muslim state where homosexual acts are technically punishable with 3-5 years jail. Yet many locals have gay experiences when younger before “straightening-up” on marriage; and, at least in Marrakech, so long as discreet, other locals (including police) turn a blind eye, and there are almost no recorded cases of related prosecutions – perhaps, the odd informal back-hander “fine”. That said, the scene is – perhaps not unsurprisingly in a predominantly poor country – largely rent-centred; so you’ll have to look almost impossibly hard to move beyond the hoards of cash- or gift-seeking young smiles your assumed relative wealth may attract, at every turn. Hotels and riads are pretty strict in banning foreigners from bringing locals back to avoid trouble with authorities. Where foliage is thin, many boys have small pads for liaisons, although always be on guard, to avoid potential danger or exploitation.

Visuals: 3x hi rez jpgs attached on accompanying email – please include the Riad one (as a secondary pic).