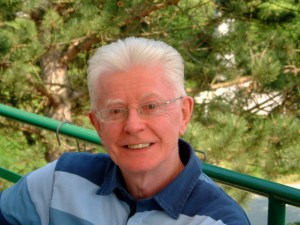 George Logan is on the phone to Bent from the bed and breakfast he now runs in Central France. The name may not ring a bell but his alter ego, Dr Evadne Hinge, in conjunction with Dame Hilda Bracket, most certainly will. This month the BBC release the DVD featuring the ladies much beloved ‘Gala Evenings’.

Do you have any memories of making these shows?

We did them back in 1977 -1981 and when they told me they were releasing them I wondered what exactly was coming out as we did so many of them at the time. So, to be honest, I can’t remember a thing, the content will be as much a surprise to you as it will be to me.

The Hinge and Bracket phenomenon was really a forerunner of every one else wasn’t it? Did you feel like you were pioneers at the time?

I don’t think we did…we thought we’d come up with a fairly original idea at the time… and were just out to have a bit of fun. I think we were sort of basing our characters on the likes of Joyce Grenfell, Margaret Rutherford… a sort of typical, if strange, rural, old English village life.

You also did West End plays and shows as other than Hinge and Bracket?

Well, we did other things but we did them in the characters of Hinge and Bracket… it was never George and Patrick… from about 1975 we never did interviews or television as ourselves… it was always Hinge and Bracket.

That sounds like amazing marketing if you don’t mind me saying so.

From one point of view it was…the downside of that was we became interlocked in the characters and couldn’t do anything else. However, for selling Hinge and Bracket… it worked. Many people, and not just the elderly, thought Hinge and Bracket were… two old dears… they didn’t know we were men.

I’ve now not set foot on a stage since 2004 but I’m sure if someone offered me thousands of pounds to come over for an appearance… I’d be there like a shot.